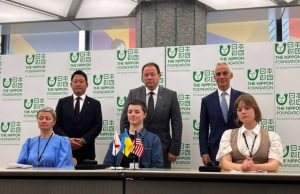 Sankei, Asahi, Yomiuri, NHK, NTV, TV Asahi, TV Tokyo, Jiji Press, and Kyodo News reported on Monday that Ambassador Emanuel and Ukrainian Ambassador to Japan Korsunsky joined the Nippon Foundation to set up earlier that day a “Ukrainian Evacuees Assistance Fund” to support Ukrainian evacuees in Japan. The foundation will seek donations from the public both in Japan and overseas for the next three months with the goal of reaching one billion yen. According to Sankei, Ambassador Emanuel proposed to Ukrainian Ambassador Korsunsky the idea of creating such a fund and the idea was realized with the help of the Nippon Foundation, which has experience providing assistance to Ukrainian evacuees. The fund will be used to support Japanese language training, provide IC cards for public transportation, and hold regional exchange events. During a press conference held in Tokyo on Monday, Ambassador Emanuel explained that his father’s family is from Odessa, Ukraine, and expressed his commitment to support the evacuees and make them feel at home in Japan until they can return to their homeland. Ambassador Korsunsky reportedly said the assistance to the evacuees will be an investment that will bring the two nations together in the area of business and expressed hope that the fund will lead to longer-term and wider assistance. According to the paper, a Ukrainian evacuee who attended the press conference talked about the horror they experienced in Ukraine and expressed appreciation for Japan’s assistance. The daily wrote that the foundation will accept donations until Sept. 30. As of June 11, 1,256 Ukrainian evacuees had entered Japan. The TV networks all broadcast footage of the press conference, including Ambassador Emanuel interacting with Nippon Foundation Director Sasakawa and Ambassador Korsunsky.