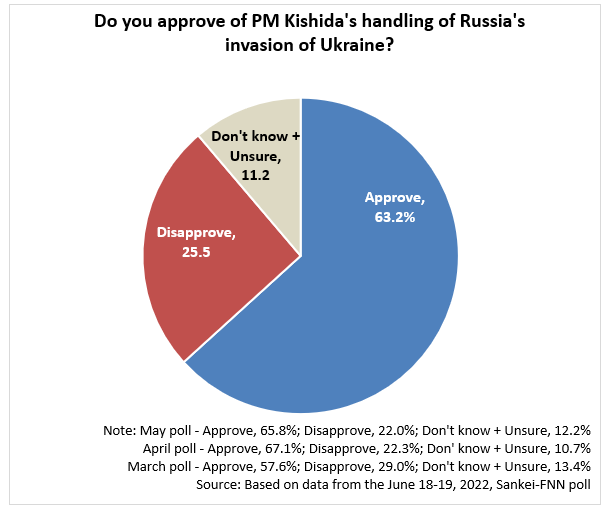 According to the nationwide public opinion poll jointly conducted by Sankei Shimbun and Fuji News Network (FNN) on June 18–19, 2022, support for the Kishida Cabinet is 63.7%, down 5.2 percentage points from the previous poll taken on May 21–22. The Cabinet has enjoyed backing in the 60% range for nine consecutive months since the inauguration of the Kishida administration. Prime Minister Kishida Fumio has avoided making any blunders. The majority of pollees said that they approve of Kishida’s key policies, including his measures to address the rise in commodity prices, which will be one of the focal points in the Upper House election. The election will be announced on June 22 and held on July 10.

Some 51.6% of respondents said that they “approve” of the Kishida Cabinet’s measures to address prices, while 42.7% said they do not. Some 63.2% of pollees said that they “back” Kishida’s handling of the Russian invasion of Ukraine, down 2.6 percentage points from the May poll. 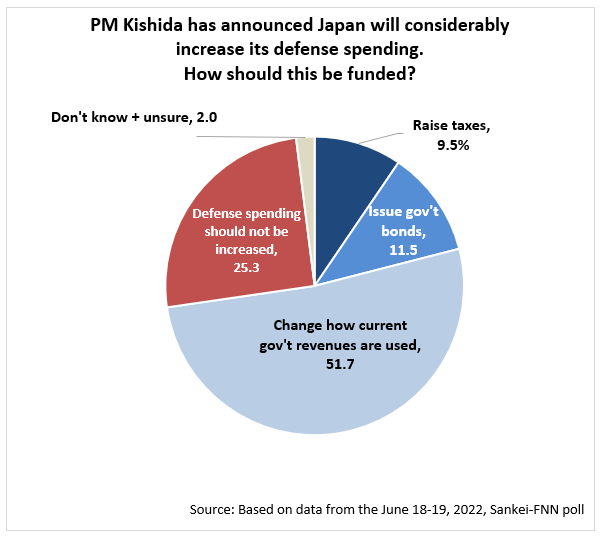 Approval of the government’s COVID-19 countermeasures remained unchanged from last month at 65.4%. Over 60% of pollees said they  approve of allowing foreigners on package tours into Japan, while a similar percentage said that they approve of the nationwide expansion of the travel discount program known as “kenmin wari.”

As for Kishida’s “asset-income doubling plan,” however, 48.3% of respondents said they “disapprove” of the plan, while only 42.8% said they approve.

Asked what policies they will weigh heavily in deciding how to vote in the upcoming Upper House election, 38.9% said “measures to address the rise in prices,” followed by “economy and jobs” (33.4%) and “pensions, healthcare, and nursing care” (32.3%). Asked which political party they plan to vote for in the proportional representation segment of this summer’s Upper House election, the results were as follows: LDP, 30.1%; Constitutional Democratic Party of Japan, 5.3%; Komeito, 5.0%; Nippon Ishin (Japan Innovation Party), 4.9%; Japanese Communist Party, 2.4%; Democratic Party for the People, 1.9%.

[Polling methodology: A total of 1,065 men and women, aged 18 and over, across the nation were surveyed. The nation was divided into 11 blocs corresponding to the Lower House proportional representation districts. The survey was conducted by placing telephone calls on a random digit dialing (RDD) basis until the calculated number of responses obtained from each bloc corresponded to that bloc’s relative population. A weighted adjustment was then performed for such variables as gender and age. Calls were placed to both landline and mobile numbers in the ratio of 4:6. The following follow-up question was posed to respondents who gave an unclear answer to the question about Cabinet support: “Which is closer to your view?” The responses to the follow-up questions were added to the responses to the initial question. The survey was conducted on June 18–19, 2022.] 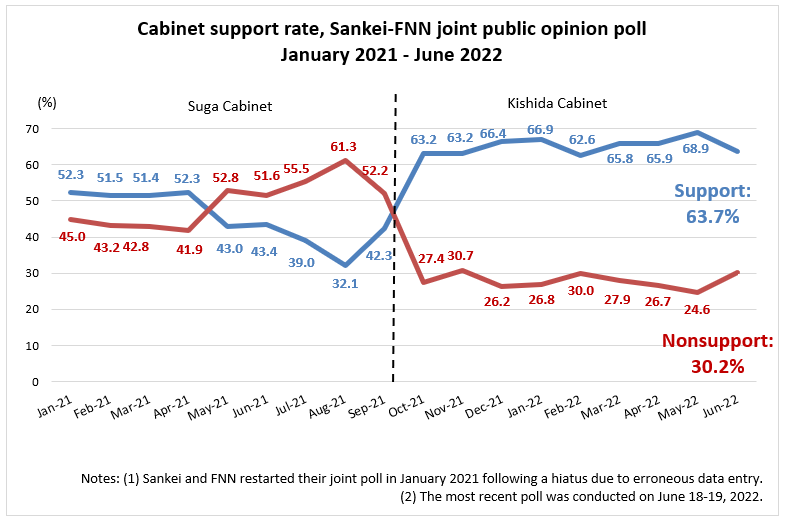