Editorial: As the guardian of free trade, WTO has a duty to fix itself 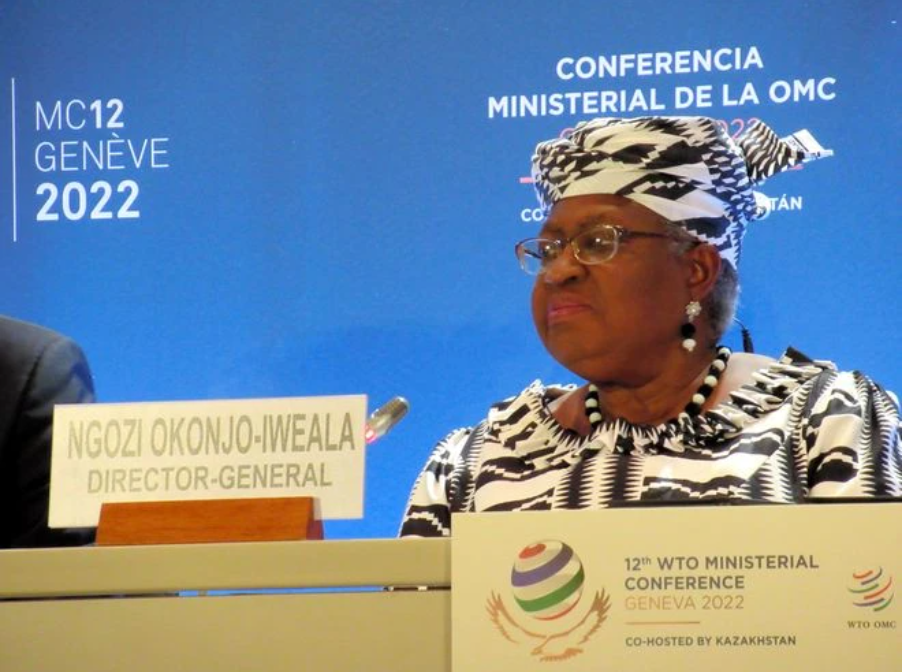 Ngozi Okonjo-Iweala, the director-general of the World Trade Organization, at a news conference held prior to the WTO ministerial meeting in Geneva on June 12 (Asahi Shimbun file photo)

A ministerial conference of the World Trade Organization adopted joint statements on a package of trade initiatives, the first in six and a half years, to address pressing concerns about the way global trade is increasingly being divided into rival blocs.

Still, a sense remains that the WTO simply put off taking decisive action on issues upon which the interests of the world’s major economic powers diverge.

We urge Japan to join hands with its trading partners in a redoubled effort to ensure the WTO is able to function properly as the “guardian of free trade.”

The WTO ministerial conferences, the organization’s highest decision-making institution, were held for the first time in four and a half years due to the global COVID-19 pandemic. The previous ministerial meeting failed to adopt a joint statement.

A key topic at the latest conference, held June 12-17 at WTO headquarters in Geneva, was finding ways to respond to food insecurity concerns in light of export curbs imposed by many countries in response to supply anxieties triggered by Russia’s invasion of Ukraine.

A ministerial declaration on food security reaffirmed “the importance of not imposing export prohibitions or restrictions in a manner inconsistent with relevant WTO provisions.” This at least will be of some help in preventing serious disruptions in global food supply chains.

But little progress was made on fixing the WTO’s dysfunctional dispute settlement mechanism, one of the body’s most important functions. The system has effectively remained on hold for nearly three years after the United States blocked the appointment of new members to the Appellate Body, a standing entity of seven members that hears appeals against the findings of the panel established by the Dispute Settlement Body.

No specific proposal to reform the system was made during the latest ministerial conference. The only agreement reached was to seek to resolve the matter by 2024.

Washington in the post-Trump era has maintained a markedly protectionist trade policy. Arguments against globalization, which is driven by free trade, are also gaining traction in other major industrial nations that blame it for low economic growth.

The United States, Europe and Japan, citing their own economic security concerns, have taken a series of steps to restrict trade with China and promote domestic production of computer chips by using massive state subsidies. China, for its part, has taken a number of questionable measures, such as stopping food imports from Taiwan and Australia under the pretext of quarantine. Beijing took the step as Taiwan and Australia are at odds with China over security issues.

Economic sanctions imposed against Russia for its unjustifiable war against Ukraine should remain in place. Clearly, links between national security and economic issues need to be considered. But haphazard restrictions under the pretext of national security do more harm than good.

Allowing the global free trade system that has flourished in the postwar period through years of efforts must not be undermined by undisciplined actions that lead to huge losses of mutual benefits. This is a case of suffering from misplaced priorities.

It is vital to prevent trade disputes from turning into serious conflict that divide the world into economic blocs as was the case prior to World War II.

The world requires a sturdy international trade order based on facts and rules. The prevailing situation makes it all the more important for the WTO to clarify afresh the established rules for trade and urge nations to comply with them.

As a nation that is a major beneficiary of free trade, Japan should not spare any effort to support the regeneration of the WTO through effective actions to tackle the key challenges facing the organization, including resuscitation of the Appellate Body.