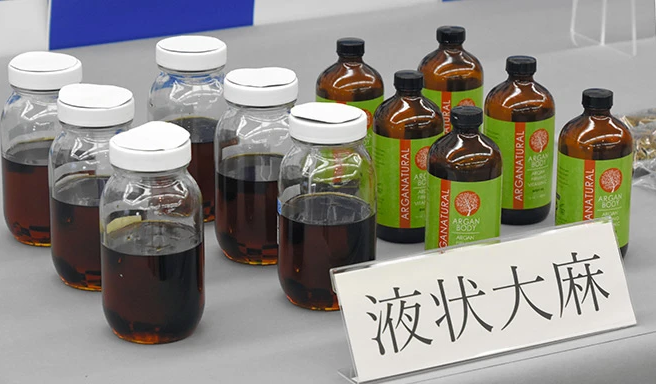 Cannabis is increasingly being smuggled into Japan in liquid form, according to Tokyo Customs authorities.

Cannabis oil accounted for 80 percent of all cannabis products seized at Haneda and Narita airports in 2021. No cannabis oil was found in 2017.

Drug traffickers apparently believe that cannabis oil is more difficult to spot because it gives off less of a distinctive odor than traditional dried leaves and flowers, customs officers said.

Growing seizures have sparked concerns that the health of users could be jeopardized.

The concentration of hallucinogenic constituents is said to be 60 to 80 percent for cannabis oil, compared with 10 and 15 percent for dried cannabis.

Cannabis oil is often disguised as honey or body oil products. Customs officers pick out suspicious deliveries based on the sender’s address and the condition of packaging. Specialized equipment is used to identify cannabis oil.

Customs data shows that 472 kilograms of illicit drugs were seized last year at Haneda Airport in Tokyo’s Ota Ward and Narita Airport in Chiba Prefecture, southeast of the capital.

Cannabis seizures increased by 11 kg from the previous year. Most products came from North America, where many states have legalized marijuana for recreational use.

Seizures of cannabis oil sharply increased in 2020, when it accounted for 91 percent of all cannabis products. It represented less than 1 percent in 2019 and 2018.

Many users inhale cannabis oil through a vaporizing device. Vaporizers are available in elaborate designs to attract young people.