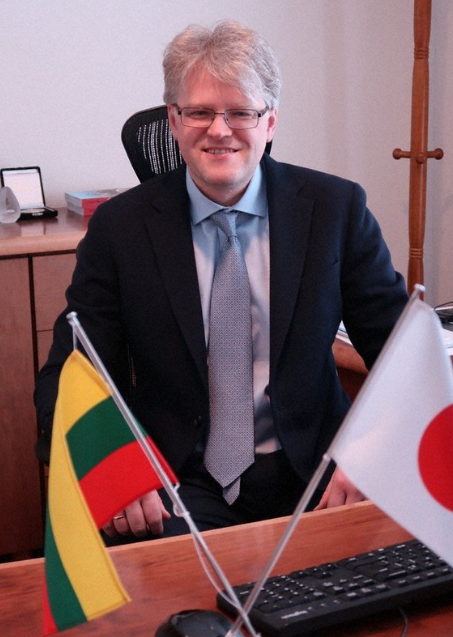 Lithuanian ambassador to Japan Aurelijus Zykas has served in the posts of head of the Centre for Asian Studies and associate professor at Vytautas Magnus University in Kaunas. He received the Japanese Foreign Minister’s Commendation in fiscal 2019.

Text and photo by Tanaka Hiroyuki

Newly appointed Lithuanian ambassador to Japan Aurelijus Zykas is regarded as a leading young Japanese language scholar in Lithuania, one of the three Baltic states. In late May, he assumed the ambassadorship, a post he says he had never imagined he would be selected for. Zykas was informally offered the post by the vice foreign minister, a former ambassador to Japan. After much thought, he accepted the offer, thinking, “It’s a mission given to me, so I should give it a try for my country.” Though he is not a professional diplomat, much is expected of his experience cultivated through grassroots exchanges and his activities taking advantage of his personal connections.

Zykas was born in Kaunas, the second largest city in Lithuania. He became interested in Chinese characters when in high school and began studying the Japanese language. He then studied at Kanazawa University and Waseda University and was involved in Japanese language education and the promotion of Japanese culture at a local university after returning from Japan. He served as an interpreter when the emperor and empress (currently the emperor emeritus and empress emerita) visited Lithuania in 2007. In 2016, he created a Japanese-Lithuanian online dictionary.

As ambassador, Zykas says he wants to expand cooperation in the fields of economy and energy, and to “further promote communal exchanges” with Gifu Prefecture, the hometown of [Japanese] diplomat Sugihara Chiune, who issued life-saving Japanese transit visas for Jewish refugees at the Japanese Consulate in Kaunas during World War II.

Previously, a Lithuanian ambassador to Japan was also accredited to Southeast Asian and Oceanian countries. But Lithuania recently set up embassies in Singapore and Australia. Zykas says, “I’m so glad that I can focus on Japan.” This year marks the 100th anniversary of Japan’s recognition of Lithuania as a state. Zykas is working energetically “without an interpreter” to make an event scheduled for the year-end a success. His wife and two daughters – one in junior high school and the other in senior high school – will soon join him in Japan. The family hopes to blend into Japanese society.