Nikkei obtained satellite images of a North Korean-registered ship carrying coal, and confirmed that the ship directly went to China by examining data from the vessel’s automatic identification system (AIS). It is likely that China — one of five permanent members of the Security Council — is involved in smuggling activities and shows that current U.N. sanctions against Pyongyang are not being fully implemented.

North Korean ships moving to and from Chinese ports

At 6:50 a.m. on Aug. 8, 2021, a high-resolution image captured by a satellite operated by U.S.-based Planet Labs shows a bulk freighter docked a coal-loading berth at the North Korean port of Nampo.

Image analysis suggests the ship is about 165 meters long and 26 meters wide. It has four holds, and a crane is located near the bridge. The vessel’s characteristics were confirmed by Nobukazu Wakabayashi, a professor at Kobe University who specializes in maritime science, and Katsuhisa Furukawa and Maiko Takeuchi, two former members of the Panel of Experts of the United Nations Security Council Sanctions Committee on North Korea. The layout and features match the North Korean-registered Tae Phyong 2.

“While the ship is anchored at Nampo, we can safely assume that the black shadows around the ship’s holds are coal,” said Wakabayashi.

The ship’s AIS data was used to investigate its subsequent movements. On Aug. 9, its signal was detected in the Yellow Sea off Nampo. It then headed west toward the coast of Shandong Province in China. 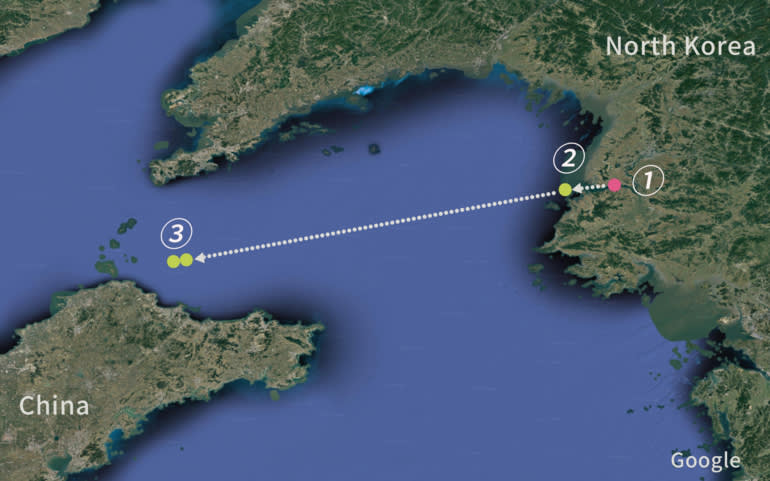 The Tae Phyong 2 continued west, entering the port of Longkou in Yantai, Shandong Province at 3:00 a.m. on Aug. 13. 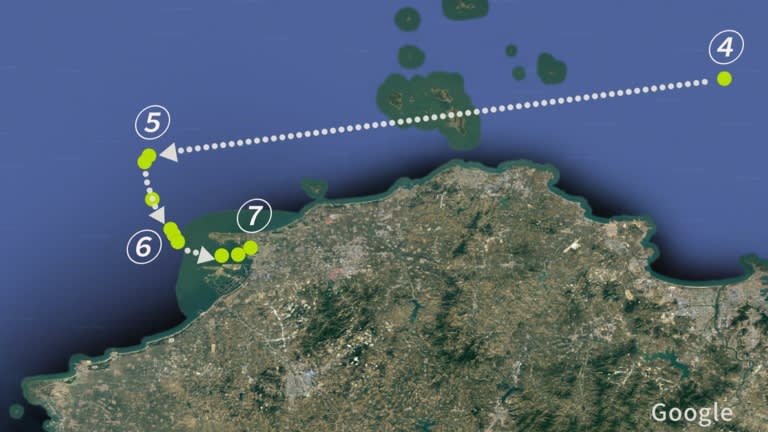 A satellite image captured on Aug. 25 showed a vessel very similar in size and color. 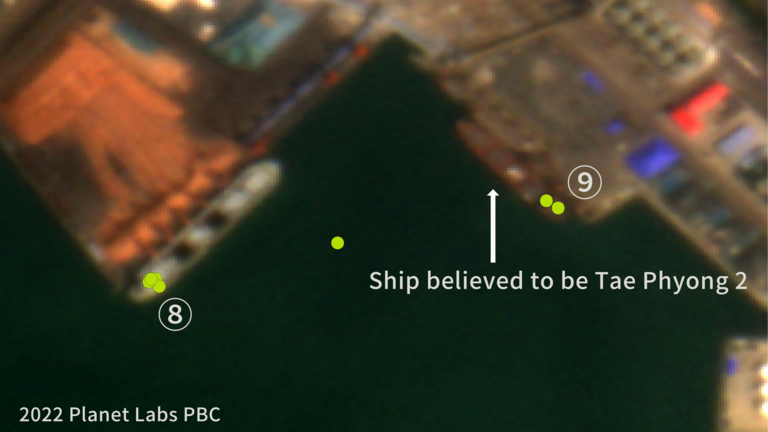 Data from S&P Global, a U.S.-based provider of ship risk information, corroborated the idea that the Tae Phyong 2 moved from North Korea directly to China. 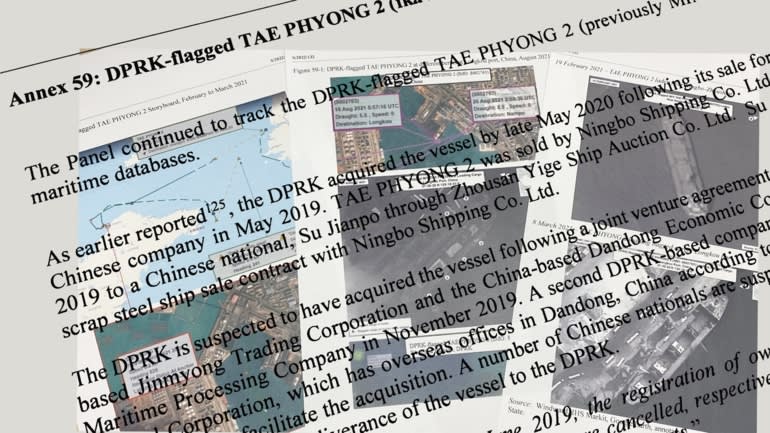 The Panel of Experts of the U.N. Security Council Sanctions Committee on North Korea mentions the Tae Phyong 2’s suspicious movements in China in a report released in March.

The Tae Phyong 2’s movements in China were also mentioned in a report released in March 2022 by the Panel of Experts of the U.N. Security Council Sanctions Committee on North Korea. When the panel — which confirmed the photos of the loading of cargo at Longkou on Aug. 21, 2021 — asked the Chinese government to disclose information about the vessel, Beijing responded that the “Tae Phyong 2 entered Yantai port [empty] in March and August 2021 respectively, and left the port [with] fertilizer and other agricultural supplies in the same month.”

However, the image taken on Aug. 8 obtained by Nikkei casts doubt on Beijing’s response.

“The ship departed for China’s coal port by the following day [Aug. 9], so it is hard to imagine it unloaded coal at a North Korean port,” said Takeuchi, a former member of the U.N. panel. “It is reasonable to think that the ship transported the coal to China and then loaded another cargo on its way back.”

Suspicious activity has continued into this year as well. The Kum Ya, another North Korean-registered vessel that has been accused of smuggling coal, at the port of Nampo on April 4.

At 2:40 a.m. on April 4, an image of the port at Nampo captured by a high-resolution satellite operated by Europe’s Airbus showed a freighter unloading white bags of goods. The characteristics of the ship matched those of the Kum Ya, a North Korean-registered vessel that has been accused of smuggling coal in the past.

AIS tracking data indicates that the vessel also left Nampo and headed west across the Yellow Sea to Longkou, just like the Tae Phyong 2. A satellite image of the port of Longkou taken at 2:19 a.m. on April 23 showed a ship believed to be the Kum Ya docking at the coal-unloading berth. The image matched perfectly with the location data from the ship’s AIS signal sent at the same time. There was also a black substance on the berth that appears to be coal. 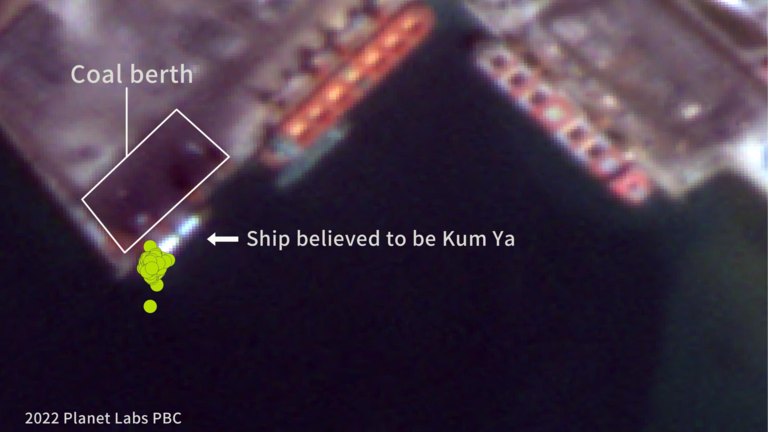 A vessel purported to be the Kum Ya lies docked next to a coal berth at the port of Longkou in China on April 23.

How often do vessels related to North Korea travel to and from China?

Nikkei obtained data on about 180 vessels — including North Korean-flagged ships and vessels that had been cited for sanctions violations in the past — from ship information companies MarineTraffic and Refinitiv, and traced their movements for about 18 months from January 2021. There were 37 vessels that stayed in the port of Longkou for several days while transmitting AIS data. Similarly, at least 20 vessels called at ports in Liaoning and Hebei provinces, which handle large volumes of coal.

Regarding the movements of North Korean vessels, there have been previous reports that they would cut their AIS transmissions, making them impossible to follow, and trade at night. Observers have often noted ship-to-ship transfers North Korea has used to circumvent conventional distribution channels, but it appears the country does not try to hide sanction-violating shipments anymore.

The Chinese embassy in Japan said it was not aware of any port calls related to suspected North Korean smuggling, as the matter is outside its jurisdiction. Nikkei asked the Longkou port operator in writing whether there were records of coal being unloaded, but no answer came by the time of publication.