Campaigning for the House of Councilors election is in full swing. Addressing high commodity prices has emerged out of the blue as an issue in the election, but interest in the election itself is not high. Meanwhile, the opposition parties don’t have their act together. It is hard to imagine things will develop in some dramatic fashion. The focus is on voter turnout: Will it be higher than the 48.8% seen at the previous Upper House election in 2019?

What election watchers are talking about is the simple question of why the Kishida cabinet has a high approval rating. In the June Nikkei public opinion survey, Kishida’s cabinet support was down 6 percentage points from the previous month’s poll, but it was still 60%.

The Kishida administration has been in office for almost nine months. It has not done anything outstanding, but it also has not made any big mistakes, either. Why does Kishida enjoy a high cabinet support rate?

Perhaps a comparison would be helpful here. Let’s compare support for the Kishida administration with that of the second Abe Shinzo administration. The second Abe administration, which was inaugurated in December 2012, had a high approval rating over its seven years and eight months in office, although it saw dips from time to time.

The first angle is the trend in cabinet support by gender. The Abe cabinet consistently had high support among men and low support among women.

Let’s take a look at the six-month period through January 2020, when COVID-19 broke out.

The difference in the cabinet support rate by gender was between 7 and 19 points. During months not listed in the chart, a difference of more than 10 percentage points was often seen between the sexes’ support for Abe.

How about the Kishida Cabinet? Let’s take a look at the first six months of 2022.

Although the difference between the sexes’ backing for the prime minister widened a bit in the June survey, cabinet support was essentially the same among men and women prior to that.

The second angle is the trend in cabinet support by age group. There is a noticeable difference between the Abe and Kishida cabinets here, as well.

Support for the Abe cabinet was much higher among young people than among senior citizens.

In September 2019, the Abe cabinet support rate was 59%, which was almost the same as support for the Kishida cabinet in June (60%). Let’s look at the approval rating by age group for these two months.

In September 2019, the older the age group, the lower the approval rating, and there was a difference of 17 percentage points between respondents in their 20s and those age 70 or over.

In contrast, the Kishida cabinet support rate by age group was as follows in the June 2022 poll.

Unlike the Abe cabinet, support for Kishida is 16 points higher among respondents in their 70s than among those in their 20s. This is the traditional structure of LDP support. 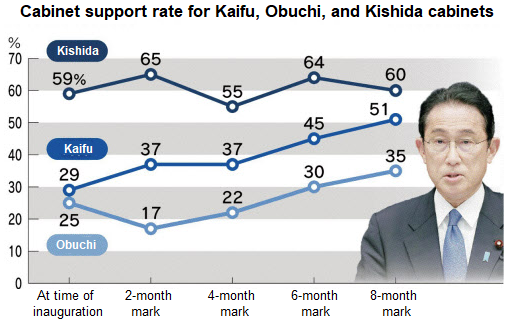 The Abe administration had a bedrock of support among men in their 20s and 30s. With the Kishida administration, that trend has completely reversed.

What should not be overlooked is the reason respondents give for supporting the cabinet. Respondents consistently say they back Kishida because he is “trustworthy.” This is always among the most frequently given reasons for supporting the Kishida cabinet. In June, 25% of respondents gave that as their reason. In this respect, the Kishida cabinet is similar to the Kaifu Toshiki cabinet and Obuchi Keizo cabinet. Their approval ratings also rose well after their inauguration.

According to the surveys conducted eight months after cabinet inauguration, 44% of respondents who backed the Kaifu cabinet and 47% who supported the Obuchi cabinet said they did so because they viewed the prime minister as “trustworthy.” These were the most frequently given responses to the question of why they support the cabinet.

Rather than aggressively launching policies, Kishida is the type who responds to what happens, as in the case of COVID-19 and Ukraine. He just sort of goes along in a mild way and gains mild support.

The House of Councilors election is a test for the Kishida administration, but unless the trends seen in the June opinion poll change suddenly due to dissatisfaction with the high commodity prices, the LDP will not suffer a significant loss.

The sum of the Cabinet approval rating and the LDP approval rating is called the “Leadership Stability Index (LSI),” and analysts watch the LSI to determine trends in the administration and election. As of the June poll, Kishida’s LSI is 105.

Let’s look at the LSI for a few other prime ministers to see patterns in cabinet and party support that have led the LDP to victory in the past.

As seen in the characteristics of cabinet support, support for Kishida is by no means strong. It is passive support. The COVID pandemic is now under control, and election campaigning is taking place as momentum for rallying behind a leader is increasing due to the Ukraine crisis.

The concrete content of Kishida’s policies is not clear. As one government minister describes it, “We have been given the restaurant menu, but we have yet to taste the food.”

Furthermore, it is uncertain what Kishida aims to do or how he is going to lead the nation.

Rapid shifts are common, and politics is a world where anything can happen at any time. Kishida’s footing is not necessarily solid. One wrong step, and his situation could change suddenly. (Abridged)