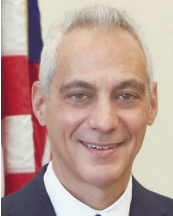 “Let freedom ring” is one of the most famous lines in American history. Martin Luther King Jr. moved the nation and the world when he cried, “Let freedom ring,” in his “I Have a Dream” speech. Whether watching clips of King on the steps of the Lincoln Memorial, or singing along with the classic tune “My Country ’Tis of Thee” every July 4, the line “Let freedom ring” stirs pride in Americans for the rights and liberties that we enjoy at home and defend abroad.

In the United States and around the world, on July 4, Americans celebrate that which we hold most dear — the freedom of our people and the sovereignty of our nation. This is why our forefathers sought and fought for independence almost 250 years ago, and this is why we don’t surrender an inch on our values and principles today.

Ambassador Rahm Emanuel and his wife, Amy Rule, welcome President Joe Biden to the ambassador’s residence in May. (courtesy of U.S. Embassy)

As America celebrates what we have, we are mindful of those around the world in Ukraine and elsewhere who are struggling for freedom and yearning for liberty. Against the backdrop of the unlawful and unjust war against the Ukrainian people, democracies around the world have united to champion the core beliefs shared by Americans, Japanese and other rule-abiding nations.

President Joe Biden’s visit in May underscored the strength of the U.S.-Japan alliance, as well as the close personal relationship between our two leaders. And this should come as no surprise: Our alliance is more than a legal agreement between two countries; it is built upon a foundation of shared values and principles. The United States and Japan share a love for liberty and freedom, a respect for human and individual rights and a vision of a prosperous and peaceful planet. As a result, America and Japan have never been closer as we stand up for what is right and what is just.

During my confirmation hearing last year, I said that what the United States does in partnership with Japan over the next three years will determine our posture in this region for the next 30 years. As the war in Ukraine has unfolded to expose designs by authoritarian countries to unravel the rules-based order and undermine

the values that we hold so dear, I believe even more strongly today than when I appeared before the U.S. Senate that the actions the United States and Japan take now will resonate globally for decades to come.

For 246 years, people across the globe have watched America’s beacon of liberty shine. Today, on the anniversary of our independence, we have the responsibility to “let freedom ring” for all of the peoples in the Indo-Pacific, whether in America, Japan, Southeast Asia, South Asia or the Pacific Islands countries. People everywhere have the right to enjoy freedom, live under the rule of law, and be able to reach their fullest potential. As U.S. ambassador to Japan, this is my commitment, in partnership with our Japanese allies. Let freedom ring!

This content was compiled in collaboration with the embassy. The views expressed here do not necessarily reflect those of the newspaper..