LDP coalition could win majority of seats up for grabs, Yomiuri poll 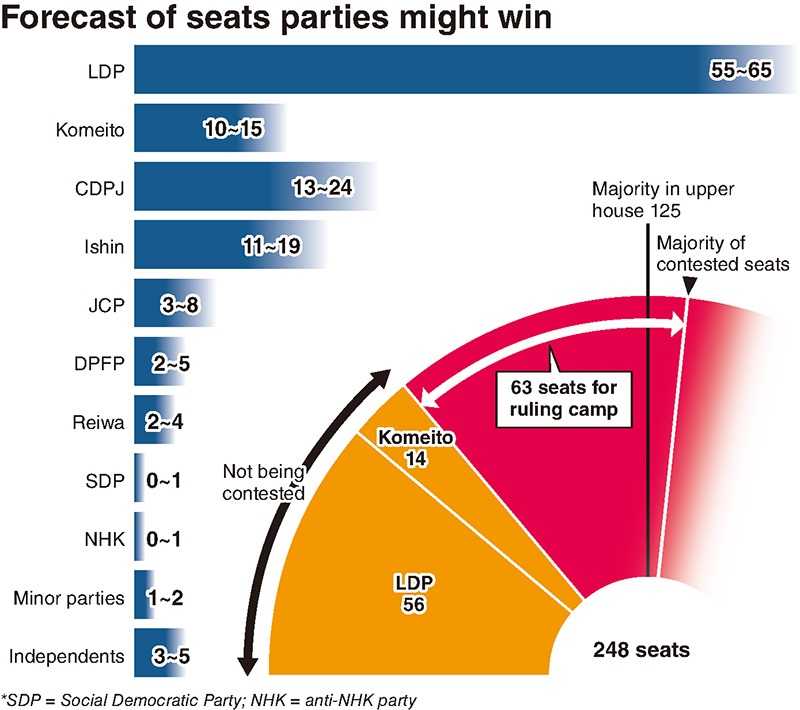 The ruling coalition of the Liberal Democratic Party and Komeito could secure more than a majority of the seats up for grabs in Sunday’s House of Councillors election, according to a recent Yomiuri Shimbun poll of eligible voters.

The largest opposition, the Constitutional Democratic Party of Japan, is struggling and it is uncertain whether it can retain all of its 23 seats being contested, the poll conducted by phone from last Friday to Sunday indicated.

Nippon Ishin no Kai (Japan Innovation Party) is on track to considerably increase its seats beyond the six that it is defending.

A key part of the election is who will win in the 32 constituencies with one seat up for grabs. The LDP is holding the upper hand in these campaigns. In 19 of these constituencies, including conservative strongholds Gunma, Ishikawa, Tochigi, Toyama and Yamaguchi, the LDP candidates are seen as being in the lead.

For the LDP’s junior coalition partner Komeito, it appears to have a good chance of taking a seat in the Tokyo Constituency.

The party aims to win a seat in each of the seven constituencies where it has fielded candidates. Komeito is also likely to obtain seven seats in the proportional representation section, the same number as in the previous upper house election in 2019.

While the CDPJ holds the upper hand in constituencies such as Chiba and Tokyo, it is unclear whether it can gain seats in Hyogo, Osaka and Saitama. In proportional representation, the party might win fewer than the eight seats it obtained in the 2019 election.

Ishin, which made great gains in the House of Representatives election last October, is on track to grab two seats in its base of Osaka. As there is the possibility that in the proportional section Ishin could win more seats than the CDPJ, it is highly likely that Ishin will not only keep its contested seats but double its number that will be up for election in 2028.

Focus has also been drawn to whether the ruling coalition and parties that have shown support for amending the Constitution, including Ishin and the Democratic Party for the People, can together hold at least 166 seats in the chamber. That number would make up the two-thirds threshold for revision of the top law in the 248-member upper house.

Upper house members serve six-year terms, with half of them up for election every three years. This year, 74 members will be directly elected from their constituency, while 50 will become members based on voting in the proportional section. There are 545 candidates with 367 listed in constituencies — including for the vacant seat in Kanagawa that will be up for election again in 2025 — and 178 named in the proportional blocs.

The Japanese Communist Party looks to be in close battles in heavily urban constituencies such as Kanagawa and Tokyo. It is likely to win four seats through proportional representation, the same number as in the 2019 election.

The DPFP aims to win seats in the constituencies of Oita and Yamagata. It is failing to gain enough support in proportional representation, however, making it unlikely for the party to retain all seven seats being contested.

Reiwa Shinsengumi has come in the range of winning seats in proportional representation. While among minor parties, Sanseito could win a seat in the proportional section.

The Yomiuri Shimbun poll received valid responses from 60,809 voters. Insights gained from newsgathering by staff across the nation were also included in its analysis.