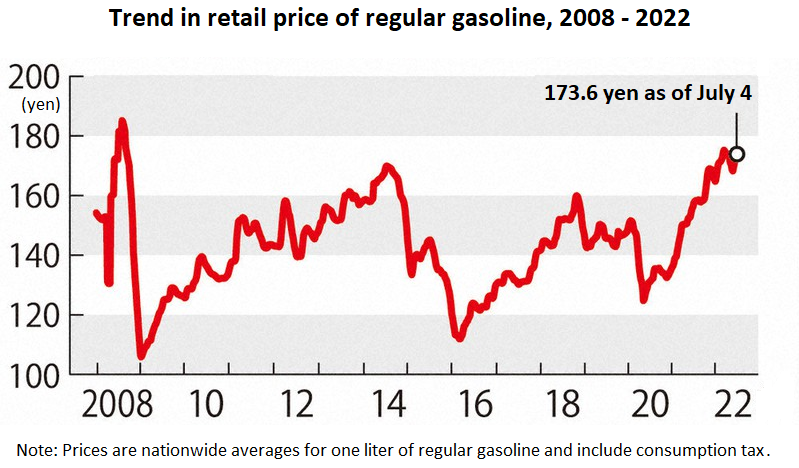 Tokyo, July 6 (Jiji Press)–The average retail price of regular gasoline in Japan as of Monday fell 1.3 yen from a week before to 173.6 yen per liter, down for the first time in five weeks, the industry ministry said Wednesday.

Despite the decline reflecting a pause in crude oil markets’ ascent, the nationwide average price remained at a high level.

By prefecture, the average price fell in 41 prefectures, rose in five and was unchanged in the remaining one. The average was highest in Okinawa, at 184.5 yen.

In the week through Wednesday, the government provided 38.4 yen per liter in subsidies to oil wholesalers, helping to curb gasoline prices by 36.2 yen.

The government plans to raise the subsidies to 40.8 yen on Thursday, the first level above 40 yen in two weeks.

Thanks to the subsidies, the average retail price is projected to drop moderately next week, according to the Oil Information Center of the Institute of Energy Economics, Japan.

[Note: The chart is a JMH translation of the line graph that appeared on page 7 of the Mainichi Shimbun on July 7, 2022.]