In the Upper House election, the Liberal Democratic Party (LDP) cruised to victory by winning a majority of the 125 seats contested alone whereas the Constitutional Democratic Party of Japan (CDPJ) fared poorly. How should the government of Prime Minister Kishida Fumio, who has won two national elections in a row since coming to power, run the country in the coming years? Japan Research Institute Chairperson Okina Yuri, Japan Institute of International Affairs President Sasae Kenichiro and Professor Emeritus of the University of Tokyo Mikuriya Takashi recently shared their insights at a virtual seminar hosted by Nikkei. (Yoshino Naoya, political editor, served as moderator.)

Q: Now the Kishida government will move into in “three golden years,” a break from any major national elections. Do you think the government will be able to truly enjoy the next three years? 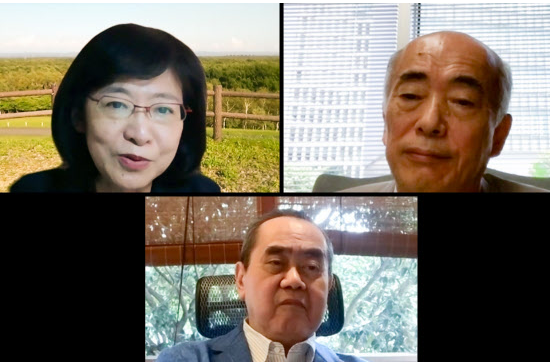 Okina: This is going to be a period when the government will need to deal with policies that are very unpopular with the people as well as those that are important but controversial. One example is how to finance green transformation (GX) transition bonds (to be issued to help procure funds for decarbonization). The next three years won’t be calm and peaceful, as the yen is already losing value against the dollar and the nation’s population is graying rapidly. I want the government to take bold steps to bring the nation’s economy back to life again.

Sasae: To have a firm grip on domestic politics and stay in power longer are important for Japan to show the world that it can demonstrate international leadership in dealing with other countries. Former Prime Minister Abe Shinzo made a diplomatic debut by sending the strong message “Japan is back.” Prime Minister Kishida should pursue his own style by making use of his vision and actions.

The man in power should cast off the mindset of retaining a safe and secure position and staying in power as long as possible. The leader should handle issues at home and abroad with firm resolve to leave the post if he/she fails to do so.

Mikuriya: Prime Minister Kishida was able to shape his position by having former Prime Minister Abe as an adversary. Now (Abe is gone), he will have to explain to the people his vision (without using the Abe presence). He must think about how he can convince the public of the need to carry out painful reforms.

Though he is given three golden years, he must keep in mind that he holds the right to dissolve the Diet and that he can do so if he wants to. He must have this sense of tension all times otherwise he won’t be able to wield his political power. He may get easily tripped up while in office over the next three years if he loses this sense of tension.

Q: In the upcoming personnel reshuffle, are there any particular posts that you are playing close attention to?

Sasae: Kishida needs to build a structure within the LDP leadership that he can take the lead in [maintaining] the power balance in the absence of Abe. He must tap people who others also think are capable to posts that oversee his signature policies. People who are given posts may feel demotivated once they sense that they were chosen to maintain a factional balance within the party.

Okina: He must pick capable persons while giving consideration to diversity. How he will treat those who were close to Abe will draw much attention.

Mikuriya: Since the establishment of the second Abe government, [cabinet and the party leadership] posts have been given to seasoned politicians, and this created few chances to groom junior politicians. Kishida must show a discerning eye to select people who may be lackluster on the surface but have the great potential and can demonstrate the ability to get the job done.

Will Kishida make a drastic departure from the previous personnel reshuffle, in which he had shown much consideration to Abe? Or will he gradually make a change? We don’t know yet. How he will treat those in the Abe faction will serve as a crucial test of his ability to make his reign longer.

Q: How do you analyze the election results?

Mikuriya: The results are well within what had been forecast, even if the tragedy of Abe was factored in. The election shows that the Kishida government, which was launched after the general election last year, won a public mandate.

When then-Prime Minister Ohira Masayoshi died during an election campaign, the LDP turned the election into a battle to mourn the diseased premier and clinched a resounding victory. I initially anticipated that a similar mourning element would play a part, but there was no impression that voters went to polling stations to fulfil their responsibility for the sake of Abe.

Sasae: Amid growing uncertainty over the global situation, the people are attaching more importance to stability than confrontation. The Kishida government is reaching a point where it will make a leap forward from the foundation built by Abe.

Okina: The ruling parties were able to clinch a big win because voters opted for a stable government in the wake of Russia’s invasion of Ukraine. The opposition parties formed an alliance, but as there are significant differences between their policy positions, they failed to offer an alternative to voters.

The rise of minority parties is another trend observed from the recent election. These parties won the support of certain groups of passionate voters. But the phenomenon is like tiny bubbles surfacing one after another and eventually vanishing. The Diet does not function if there is no opposition force, but in reality, there are no opposition parties [that can present voters an alternative]. Japan’s parliamentary democracy is in danger.

Sasae: In democracy, a sound opposition party can replace the ruling party for regime change and they can provide a stimulus to each other. But there is no such chance or potential of the ruling and opposition parties alternating in power in Japanese politics, and the situation is indeed a grave concern. The people have no alternative to choose if political power is dispersed throughout the opposition camp and no policies or political tenets are presented.

Okina: The people sought political stability by voting for the LDP. But did they truly want it to win by such a large margin? The opposition parties failed to align due to their policy differences. The death of Abe may also have worked in favor of the ruling camp to achieve a big win.

Mikuriya: Ishin is a hodgepodge party. This became evident when Matsui Ichiro announced his resignation as party leader on July 10. Yoshimura Hirofumi, deputy head of the party, says that he is not interested in succeeding Matsui. At a time when the party is about to move to the next stage, no one inside the party volunteers to become the next leader. If this had happened in other parties, they would have drawn ire [from the public].

Q: The LDP included in its campaign pledges the goal of increasing defense spending to 2% of gross domestic product (GDP). What’s your take on this?

Sasae: The United States and European nations use defense spending as a share of GDP to gauge their responsibility for national defense. Japan, too, should develop such an index so that it can assess the necessary size of its national defense. It is unproductive to discuss which should come first (budget content or budget amount). One idea is to review the definition of defense spending and make it comparable to that of the U.S. and Europe.

Japan lags way behind in space and cyberspace. The government should inform the public of this. Military power is for the purpose of strengthening the nation’s deterrence. This is indispensable for Japan and should be given priority.

Mikuriya: It is difficult to gain public understanding. It is difficult [for the government] to make the people understand the need to allocate money for strengthening defense capabilities at a time when state coffers are running short due to social welfare and education spending, because defense spending has little to do with improving people’s livelihoods. The government must continue to emphasize the importance of increasing the defense budget until the people understand.

Okina: There are discussions that the increase in defense spending should be financed by issuing deficit-covering bonds. Given Japan’s dire fiscal strains, it is not easy to finance the increase by solely relying on government bonds. The government needs to look into various financial sources and discuss them carefully.

Q: How should Japan prepare for a cross-strait contingency?

Sasae: Japan should conclude an economic treaty with Taiwan. Discussing Taiwan’s accession to the Trans-Pacific Partnership (TPP) agreement will take time because this will press Taiwan, the U.S. and China to make difficult choices on the strategic front. What is important is to maintain a balance in a way not to put Taiwan at a disadvantage.

Q: What message should Japan convey at next year’s G7 summit, which will be held in Hiroshima?

Sasae: For better or worse, the world is in the midst of an era of military expansion. At some point, the world needs to make efforts to reverse this trend. In summer, the review conference of the parties to the Treaty on the Non-Proliferation of Nuclear Weapons (NPT) is scheduled to take place. How to respond to Russian President Vladimir Putin’s nuclear saber-rattling will be discussed there.

The G7 summit in Hiroshima should become a good opportunity to return to the starting point and call for disarmament. It will become very important to send a message from Hiroshima that [the G7 leaders] will strive to ease tensions.

Q: Do you want the next Bank of Japan governor to keep the current monetary easing policy or depart from it?

Okina: The BOJ keeps monetary easing because it cannot increase interest rates substantially, so it is difficult to revise the current policy. Investors are making moves on speculation that there will be some changes (such as setting a cap on long-term interest rates).

It is difficult to make drastic changes but conveying the message of paying consideration to the weak yen could make a difference. It is hoped there will be a slight change in the mindset of the BOJ. I hope the next governor will make modifications to the current unprecedented monetary policy and bring it back to normal at a gradual pace.

Q: Is the present currency depreciation good or bad?

Okina: What is happening right now is cost-push inflation. People are taking a direct hit from rising food and energy prices. In good inflation, wages go up and so do prices. Unfortunately, this is not the case for Japan.

Sasae: Among the three arrows of Abenomics, structural reforms did not really take place. The government should examine the policy’s drawbacks and make better use of them in making drastic changes. If there are problems with the supply side, it is necessary to change the root of policies.

Q: How about the issue of nuclear power generation?

Mikuriya: [We have to achieve] decarbonization. Some people call for discontinuing the use of nuclear power generation whereas others demand nuclear power be used for the time being because it is difficult to solely rely on other energy sources.

We cannot deny the possibility of another nuclear power accident. While we continue discussions on how to utilize nuclear power generation for the time being, at the same time we should seriously craft a future vision for our energy policy.

Sasae: Nuclear reactors that can be operated again should be put back online as soon as possible. One idea is to replace aging reactors. We need to take a more flexible approach. The government should honestly tell the public that the suspension of reactors is causing inconvenience and move in the direction of restarts. (Abridged)