Opinion: Kishida should tell Biden to get real about Russia sanctions

Masahiro Matsumura is professor of international politics and national security at the faculty of law of St. Andrew’s University in Osaka.

Shinzo Abe’s assassination has prompted many reflections on his foreign policy legacy. Among his proudest achievements was an improved relationship with neighboring Russia.

This feat, however, has been called into question since the eruption of the Ukraine war five months ago due to the Kishida administration’s rhetorical support for the West’s sanctions policy against Russia.

It is time for Prime Minister Fumio Kishida to recognize that the sanctions, among the strongest and most extensive seen in modern history, are not working well. He should use his influence in Washington to push for a change of course that could help address soaring food and energy prices and the geoeconomic risks they pose.

Kishida has held back from providing Ukraine with offensive weapons, but he has crossed Japan’s neutrality obligations by providing military helmets, bulletproof vests and other nonlethal defense items.

While Kishida’s moves against Moscow have sounded tough, putting Tokyo in the kind of righteous position it last enjoyed as a member of the victorious alliance in World War I, the measures have, in fact, been little more than symbolic given Japan’s limited trade with Russia.

Worse, the steps have prompted implicit retaliation from Russian President Vladimir Putin, who this month reassigned ownership of the Sakhalin-2 liquefied natural gas project to a new company, putting at risk the stakes Japanese shareholders Mitsui & Co. and Mitsubishi Corp. hold in the venture.

As prime minister, Abe built a solid personal relationship with Putin through more than two dozen summit meetings, which continued even after Russia invaded and annexed Crimea. Abe appeared to be one of few top leaders from the Western bloc who might be able to negotiate a grand strategic bargain with Putin. 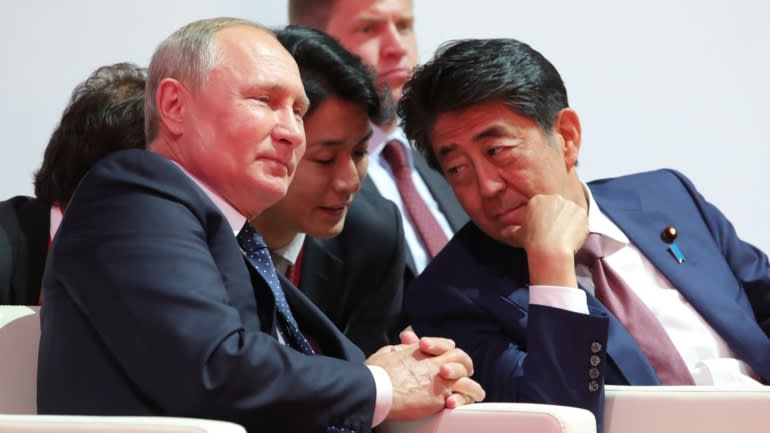 Shinzo Abe and Vladimir Putin in Vladivostok in September 2019: Abe appeared to be one of few top leaders who might be able to negotiate a grand strategic bargain with Putin. (Handout photo from Kremlin Press Office)   © Reuters

Abe’s approach reflected his understanding that Russia, at least in form, is an electoral autocracy different from communist China, and his strategic judgment that Tokyo should aim to thwart the formation of a new bloc by the two, instead seeking to use Moscow as a counterweight to Beijing.

As a latter-day Otto von Bismarck, Abe proposed the “Free and Open Indo-Pacific” strategy to counter China’s Belt and Road Initiative. This concept has since been widely embraced by the U.S. and other major allies. Abe also took the initiative to build the Quadrilateral Security Dialogue, or Quad, helping pull India together in a bloc with Japan, Australia and the U.S.

Still, Abe fine-tuned his stance toward Beijing by enabling limited policy coordination and cooperation in aid and development with China’s BRI in needy nations.

Kishida had not been expected to follow Abe’s security stance, given that he led a dovish wing of the ruling Liberal Democratic Party and was elected to the Diet from Hiroshima, where pacifism is most entrenched due to the city’s suffering from U.S. atomic attack. The two men were rivals and had long-standing ideological differences.

A worry now is that Kishida’s confrontational approach to authoritarian Russia and China will come into conflict with his efforts to balance the government budget.

But while pushing ahead with further sanctions against Moscow might seem to represent a continuation of Abe’s strategic line, it would represent a misunderstanding of the essence of his statecraft.

The need for a diplomatic settlement to the Ukraine war has become obvious. The U.S. and other Western nations have failed to supply sufficient arms to Ukraine to change the course of the conflict, even as Russian armed forces have consolidated effective control in the Donbas region and other areas.

Neither have the West’s economic sanctions halted Russia’s aggression, in part due to the abstention of a majority of developing countries. Indeed, China, India and others have significantly increased imports of Russian oil and gas, meaning that the West’s policy has been both ineffective against Moscow and self-damaging in inflating fuel prices.

The raging inflation fueled by sanctions is already triggering a swift tightening of monetary policy that looks likely to bring about a global recession and perhaps even a depression in the West. Should the U.S. force major security partners to go further in sanctioning Russia by taking advantage of their reliance on its military power, the Washington-led alliance system could be stretched to the breaking point.

The world is now at a crossroads. Kishida should emulate Abe’s finesse by persuading U.S. President Joe Biden to move away from his dysfunctional sanction policy and explore a realist settlement to the Ukraine war from a global perspective. Kishida cannot wait on a righteous European ally to take up this challenge.