The U.S. Congress recently passed the bipartisan CHIPS Act,
earmarking $52 billion in subsidies for the industry.
(Photo by Ryosuke Eguchi)

The company will invest around 50 billion yen ($372 million) to boost production capacity for super-pure hydrogen peroxide, which is used in making high-performance chips. Production lines will be added at a facility in Oregon, and a new plant is on the table as well.

The fresh investment in the U.S. comes as chipmakers like Intel and Samsung Electronics lay out plans for new plants there. Japan’s Showa Denko and South Korea’s SK Group are also considering U.S. investments in chipmaking gas production.

The U.S. Congress recently passed the bipartisan CHIPS Act, earmarking $52 billion in subsidies for the industry, as Washington competes with China for tech superiority while seeking a more secure supply of essential components.

Most of the world’s high-performance chips come from Taiwan, and a geopolitical crisis there could put that supply at risk. 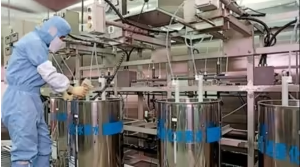 The U.S. and Japan also agreed at their first-ever economic “two-plus-two” meeting last week to cooperate on mass-producing next-generation semiconductors.

Super-pure hydrogen peroxide is used to clean microscopic debris from chips without damaging their minute structures. It is also used in polishing and circuit etching.

Mitsubishi Gas Chemical controls half the global market for super-pure hydrogen peroxide, with production facilities in the U.S., Japan, South Korea and Taiwan. It can now produce 140,000 tonnes a year in the U.S. alone.