President’s Aug. 15 speech will offer clues on importance of ties with Tokyo 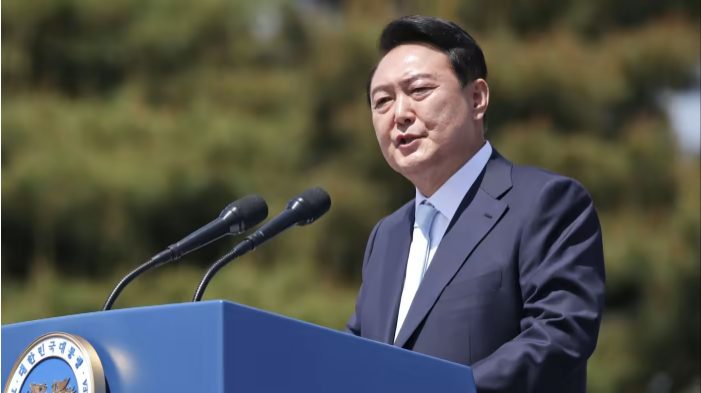 South Korean President Yoon Suk-yeol delivers his inaugural address in Seoul on May 10. (Yonhap via Kyodo)

TOKYO — South Korean President Yoon Suk-yeol is set to deliver a “historic address” signaling a radical shift in South Korea’s policy toward Japan on Aug. 15, National Liberation Day, according to a source close to Yoon. The day marks the country’s annual celebration of its liberation in 1945 from 35 years of Japanese colonial rule.

Yoon, who took office in May, is working on a message that he hopes will show his desire to repair strained ties with Japan, the source said. The annual address is an important indicator of the state of relations between Seoul and Tokyo.

In his Liberation Day address in 2012, former President Lee Myung-bak called on Japan to take “responsible measures” to deal with the issue of comfort women, contending that Japan had committed an act that “ran counter to universal values of the humanity and the right history.”

Lee, a conservative leader, came under political pressure after South Korea’s Constitutional Court ruled in August 2011 that the government’s failure to deal with the comfort women issue was unconstitutional. Five days before his address, Lee landed on the Takeshima islands, known in South Korea as Dokdo, a group of islets in the Sea of Japan claimed by both countries but occupied by South Korea. Lee’s act was seen as provocative by Tokyo and broke a diplomatic taboo.

Park Geun-hye, another conservative president who succeeded Lee, sent out mixed signals in her Liberation Day speeches during her years in office. In her first Aug. 15 speech in 2013, Park called for “responsible and sincere measures to heal the pain of women who are still suffering from wounds stemming from history.” In a ceremony to commemorate March 1 Movement, a series of demonstrations for Korean independence from Japan that began on March 1, 1919, Park famously said “the historical positions as perpetrator and victim [of colonial rule] will not change even after 1,000 years pass.” Her address in 2014 echoed this stance, as she expressed her wish to see Japanese political leaders’ “wisdom and determination.”

Her speech in 2015, however, showed a significant change in her administration’s stance toward the two neighbors’ shared history. Surprisingly, she commended a statement issued the previous day by then-Japanese Prime Minister Shinzo Abe to mark the 70th anniversary of the end of the war. While admitting there are quite a few unsatisfactory elements in the statement, Park nevertheless expressed a positive view of the document, saying it clearly stated Japan’s “apologies and remorse.”

At that time, Tokyo and Seoul were negotiating an agreement behind the scenes on the issue of the comfort women. The two governments signed an accord at the end of 2015. Park’s Aug. 15 address in 2016 clearly expressed her wish to mend bilateral ties, and called for efforts to build a “future-oriented relationship.”

Before she could achieve this goal, however, Park resigned following her impeachment and conviction on corruption charges. Park’s left-leaning successor, Moon Jae-in, reversed course. In his Liberation Day speech in 2017 Moon brought up the issue of South Korean forced labor during World War II.

Moon said that to resolve the issues of the comfort women and wartime laborers, he would stick to the principle of “redeeming the honor of victims and obtaining compensation for them.” He also made a “promise to get to the bottom of the matters and prevent a recurrence,” stressing that “a courageous stance by Japanese leaders is necessary” to settle the issues.

Under Moon’s “victim-oriented principle,” he repeatedly referred to ideals but eschewed sensitive political decisions, putting the onus on the Japanese side to reach out. Moon’s approach succeeded only in making it difficult for diplomats to improve bilateral ties.

Moon’s Liberation Day address in 2018 was mostly devoted to issues related to North Korea. He expressed his determination to pursue the “complete denuclearization” of the North before his scheduled meeting with North Korean leader Kim Jong Un in Pyongyang in September that year.

He proposed the creation of a “special economic zone” in areas along the Demilitarized Zone that marks the boundary between the two Koreas. In a rare omission, Moon did not mention historical issues between Japan and South Korea, hinting at a lack of interest in the subject.

In 2019, when observers began saying relations between Japan and South Korea were at their lowest ebb since normalization in 1965, Moon said in his Aug. 15 speech that he was “willing to shake hands” with Japan if Tokyo took the path of dialogue and cooperation. His speeches in 2020 and 2021 struck a similar note.

In 2020, Moon said he was keeping “the door to bilateral talks open,” and was “ready to face the Japanese government” for talks. The following year he said, “The door to dialogue is always open,” and hoped that South Korea and Japan would “overcome difficulties by pooling their wisdom.” But Moon’s remarks about improving the bilateral ties came to nothing in the end.

According to senior officials in the current South Korean government, Yoon is working on a radical departure from the traditional approach to historical issues with Japan in his Aug. 15 address. Instead of urging Tokyo to take the initiative in tackling thorny issues, the officials said Yoon will likely offer a new vision for the future of bilateral ties. A lawyer representing plaintiffs in a wartime forced labor lawsuit speaks to the media in Seoul on July 14 after taking part in a public-private council meeting aimed at settling the dispute.    © Kyodo

As for the touchy question of wartime labor, a close aide has said Yoon is eager to move toward resolving the dispute, even if it takes time to produce results. His speech will not include calls for a Japanese apology or “heartfelt soul-searching,” because neither the Japanese government nor the companies involved is likely to respond.

Yoon has set up a new public-private council tasked with making proposals to settle the forced labor dispute and is pressing the panel to finish its work by the end of August. The move aims to ensure that his Liberation Day address will be seen as an effective diplomatic message.

But the outlook remains murky. The proposal that the South Korean government pay compensation to former laborers on behalf of the Japanese companies faces opposition from some plaintiffs. Many observers are concerned that the Yoon administration will struggle to build consensus on the issue.

One idea being discussed by policymakers in Seoul is for the public-private panel to be disbanded after proposing that Seoul compensate the wartime laborers on behalf of the Japanese companies. The proposal would also call for goodwill gestures from the Japanese side. This idea reflects the Yoon administration’s hopes that the recommendations could forestall legal moves in South Korea to liquidate the assets of the Japanese companies and use the proceeds to compensate the laborers.

After assessing Tokyo’s reaction to those developments, Yoon will decide whether to move forward with government-backed restitution or accept Japan’s claim that the wartime labor issue were settled by the 1965 normalization treaty.

Either way, Yoon will likely face a backlash at home. His address on Aug. 15 will be a test of his commitment to bringing about a true and lasting reconciliation between the feuding neighbors.