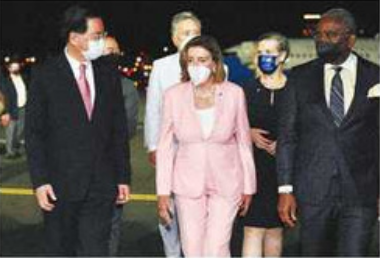 The visit to Taiwan by U.S. House of Representatives Speaker Nancy Pelosi has further intensified the confrontation between the U.S. and China. To counter the visit, China immediately launched military exercises as if to encircle Taiwan. Also, the U.S. deployed an aircraft carrier and other vessels to waters near Taiwan. Washington and Beijing need to exercise restraint to prevent the occurrence of a dangerous situation.

In the statement released after Pelosi arrived in Taiwan, she underscored the reason for her visit, saying it was “intended to show the U.S.’s unwavering commitment to protect Taiwan’s democracy.” In response, the Chinese foreign ministry released a statement condemning the visit, which said, “We have lodged firm opposition and a strong protest.”

During the teleconference with U.S. President Joe Biden last month, Chinese leader Xi Jinping warned against the visit in strong language: “Those who play with fire will perish by it.”

Pelosi’s going ahead with the visit to Taiwan despite Xi’s warning caused him to lose face as he seeks a third term in office at the Chinese Communist Party congress to be held this autumn. China may be reacting sharply to Pelosi’s visit so as not to be criticized by the Chinese people as being weak-kneed toward the U.S.

China, which defines the Taiwan issue as a “core interest” related to territory and sovereignty, has repeatedly expressed disapproval of exchanges between U.S. and Taiwanese officials.

The fact that the House Speaker, who is second in the line of succession to the presidency, met with Taiwanese President Tsai Ing-wen may have further provoked China.

Pelosi reportedly reiterated the U.S.’s support for Taiwan’s democracy during the meeting with Tsai.

China should be aware that its recent hegemonic moves, including the suppression of democracy in Hong Kong and the expansion of its effective control in the South China Sea through the use of force, have led the U.S. to push back even harder against it.

It is significant that in her statement Pelosi expressed the view that there is no change in the U.S.’s One China policy of recognizing Taiwan as an inseparable part of China. China should have accurately received the message that the U.S. does not support Taiwan’s independence.

On the other hand, Pelosi should have been more prudent. Repeatedly taking actions that could be regarded as provocations may escalate a confrontation to where it is no longer controllable and lead to an accidental clash. U.S. and China more than anything else should strive to ease tensions.