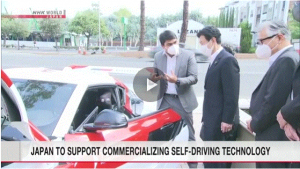 Japan’s economy minister says the government will promote discussions with the auto industry to help achieve the early commercialization of self-driving and other state-of-the-art technologies.

Economy, Trade and Industry Minister Nishimura Yasutoshi visited Toyota Motor’s research and development facility in Silicon Valley, California, on Saturday. He had earlier attended a ministerial meeting of the Indo-Pacific Economic Framework for Prosperity, or IPEF, in Los Angeles.

Nishimura was briefed on the development of Toyota’s latest robotic technology for production and logistics. He also rode in an autonomous vehicle being tested on public roads.

Nishimura told reporters that he feels autonomous driving is becoming a reality.

He said Japan, as a leader of the world’s automotive industry, should discuss the early commercialization of self-driving and other cutting-edge technologies as well as measures to support their spread.

Nishimura indicated that the government plans to hold a meeting of relevant ministers, including Prime Minister Kishida Fumio, and top executives of Japan’s auto industry as early as next month to exchange views.

Kishida indicated in June that he intended to hold dialogue on the matter between the government and the auto industry.