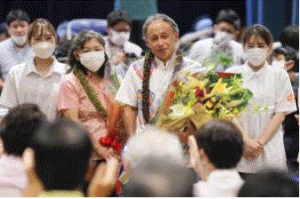 Tamaki Denny holds flowers after securing reelection in the Okinawa gubernatorial race in Naha City at 8:32 p.m. on Sept. 11.

Incumbent Okinawa Governor Tamaki Denny, who opposes the relocation of the U.S. military’s Futenma airfield to the Henoko district of Nago CIty, won reelection in the recent Okinawa gubernatorial race, beating a first-time candidate backed by the ruling bloc of the central government. The Asahi Shimbun, the Mainichi Shimbun, and the Tokyo Shimbun wrote that Tamaki said “no” to the Henoko relocation plan. On the other hand, the Sankei Shimbun called on the governor to change his confrontational stance against the backdrop of a harsh security environment, including [Chinese incursions into] the Senkaku Islands (Ishigaki City, Okinawa Prefecture) and a possible Taiwan contingency.

After securing a victory, Tamaki said, “It’s a plain fact that I was able to win thanks to public opposition to (the relocation)” and “[My victory] is a result of Okinawa people’s consistently voicing opposition (to the relocation).”

Asahi wrote: “Okinawa has shown its rock-solid will to reject the Futenma relocation plan. The administration of Prime Minister Fumio Kishida should immediately stop the reclamation work and start exploring potential alternative plans.” Mainichi argued: “Work to complete the base will be difficult, and the relocation plan should be rethought,” presenting a fresh opposition to the relocation. Tokyo Shimbun stated: “If the government forces through the completion of the new base, it will only feed Okinawa people’s distrust. It is questionable whether [the new base] can maintain the stability and sustainability of the U.S. military stationed in Okinawa, which is premised on the understanding of local residents. It is also questionable whether [the new base] will undermine the deterrence of the Japan-U.S. security arrangements when China is stepping up its military pressure and a possible invasion of Taiwan has been pointed out.”

But the decision on where to set up U.S. military bases is a matter of national security policy, the sole prerogative of the central government. It is not the prerogative of a governor or a decision made through a gubernatorial election. Chief Cabinet Secretary Matsuno Hirokazu said at a news conference on Sept. 12, “The relocation to Henoko is the only solution to maintain the deterrence of the Japan-U.S. alliance while eliminating the danger the Futenma airfield poses to the local populace,” underscoring the central government’s plan to proceed with the construction work for the relocation.

Yomiuri criticized Tamaki’s wholehearted devotion to opposing the relocation to Henoko. It made a request, saying: “Futenma Air Station, surrounded by residences and schools, has even been described as “the most dangerous base in the world. Tamaki needs to present a plan that offers a realistic solution on how he intends to eliminate the dangers of Futenma.” The paper then said: “Continuing to engage in an unproductive confrontation with the central government over the issue of the relocation of U.S. military facilities will certainly not lead to the development of the prefecture as a whole. The governor should see the bigger picture and seek a way out of the situation.” It went on to say, “The governor, in cooperation with the central government, has a responsibility to present a clear vision for the future of the prefecture,” urging Tamaki to change his confrontational stance.

The security environment surrounding Japan, particularly Okinawa, is becoming increasingly severe due to growing Chinese military threats. But topics related to Okinawa people’s security other than the relocation issue were hardly discussed in the latest Okinawa gubernatorial election. Sankei said, “This was extremely disappointing.” It also wrote: “In a Taiwan contingency, Okinawa may accept refugees and residents of the Sakishima Islands may be forced to evacuate. Also, the main island of Okinawa may come under missile attack.” The paper then presented a harsh view, saying: “Security involves foreign countries. However much Japan longs for peace, an enemy nation may invade us anyway.”

The Nikkei summed up [the gubernatorial election], saying, “As happened in the Upper House election in July, the central government’s and the ruling bloc’s expectations that they would be able to benefit from the growing public interest were dashed.” The paper also stressed: “The central government is being overly sanguine if it thinks it can gain a public consensus by  speaking loudly about threats during discussions on national security. The central government is reviewing three security documents and increasing defense budget toward the end of the year. But acquiring counterstrike capabilities, which the central government is currently considering, involves constitutional debate, including on exclusive defense. So procedures to carefully seek understanding are indispensable.”

Okinawa hosts 70% of the U.S. military installations in Japan. It is needless to say that regardless of the results of the gubernatorial election, efforts are necessary to reduce its burden.