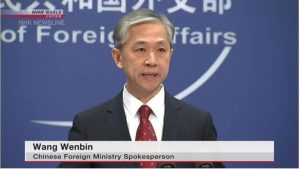 China’s foreign ministry has cautioned Japan over its treatment of Taiwan at the state funeral of former Prime Minister Abe Shinzo.

Ministry spokesperson Wang Wenbin was asked at a news conference on Tuesday about delegates from Taiwan offering flowers at the funeral.

Wang said Taiwan is an integral part of China, and that the “One-China Principle” is universally acknowledged by the international community.

He urged Japan to abide by the principles of the four political documents it exchanged with China, and to refrain from providing any stage or opportunity for political maneuvers by Taiwanese separatists.

Local TV stations are emphasizing that the three Taiwanese delegates were introduced as being from Taiwan when they laid flowers alongside other foreign attendees at the venue.

Some Japanese media pointed out that this amounts to treating Taiwan as a state, a move that could invite backlash from China.

The secretary-general of the Taiwan-Japan Relations Association, Chou Shyue-yow, told reporters on Tuesday that there is no justification for China to make such a protest regarding an issue concerning basic obligations and humanity between Taiwan and Japan.