By Nishio Kuniaki and Tajima Nobuhiko

Increasing defense spending is one of the key issues to be discussed by the government’s expert panel on “fundamentally reinforcing Japan’s defense capabilities.” This group is set to hold its first meeting on Sept. 30. Japan’s traditional guideline of limiting defense spending to 1% of the gross domestic product (GDP) has been in place since the end of World War II, but it is expected that the panel will propose a significant increase, which would constitute a historic shift. The following is a summary of the current status of Japan’s defense expenditures and related issues.

The initial budget for FY2022 sets total expenditures at 107.5964 trillion yen. Of this, defense spending is approximately 5.4 trillion yen (5%), roughly equivalent to expenditures made on education and science promotion. The breakdown of the initial budget for defense is as follows: 42.0% for personnel, 24.7% for maintenance, and 15.8% for the purchase of equipment, such as tanks and escort vessels.

In 1976, Prime Minister Miki Takeo’s administration passed a cabinet decision to cap defense spending at 1% of the gross national product (GNP). Although this policy was abolished 10 years later by Nakasone Yasuhiro’s cabinet, subsequent administrations have often kept their initial budgets within 1% of GDP. The initial budget for FY2022, for example, is 0.95% of GDP.

If the defense costs allocated in supplementary budgets are added in, however, the annual defense budget already exceeds 1% of GDP. In FY2021, the government included more than 700 billion yen in missile-related costs in that year’s supplementary budgets, bringing the total, including the initial budget, to approximately 6.1 trillion yen. The total exceeded 6 trillion yen for the first time and was 1.09% of GDP.

Based on the budgetary requests submitted by ministries and agencies to the Ministry of Finance at the end of August, a large increase in defense spending is expected in next fiscal year’s draft budget, which is now under consideration.

In light of the Ukraine crisis and other factors, the Liberal Democratic Party specified in its July Upper House election campaign platform that it would “aim to put in place the budget necessary for a fundamental reinforcement of defense capabilities within five years starting from the next fiscal year, with the defense budgets of NATO countries in mind (2% or more of GDP).”

The details of “defense reinforcement” will be discussed by the “expert panel to comprehensively consider defense capabilities as a national strength,” which will hold its first meeting on Sept. 30. Some within the Ministry of Defense are calling for an increase in the budget to secure ammunition and other resources. The securing of new capabilities, such as counterattack (enemy base attack) capabilities, will also be considered.

What does the figure of “a minimum of 2%,” as is the case for NATO countries, mean?

NATO’s definition of defense spending is broader than Japan’s. Based on NATO’s definition, the Ministry of Land, Infrastructure, Transport and Tourism’s budget for the Japan Coast Guard (approximately 260 billion yen in FY2021) and the Ministry of Health, Labour and Welfare’s expenditures for public officers’ pensions (approximately 130 billion yen) would be included. Adding in these items, Japan’s defense spending [in FY2021] totals 6.9 trillion yen, or 1.24% of GDP.

Using the “2% or more of GDP” concept, the amount of defense expenditure increase in real terms will vary depending on whether the NATO definition is adopted or not. Chief Cabinet Secretary Matsuno Hirokazu and Defense Minister Hamada Yasukazu have suggested that there is room for considering adopting the NATO definition for future defense spending, saying that it would be “helpful” and “has a certain amount of significance.”

Furthermore, some in the government are of the opinion that the discussion of defense expenditures should include R&D expenditures in the digital and space domains, as well as airport and port development costs in light of the concept of “dual use,” where civilian technologies are also used for military purposes.

In recent years, increases in defense spending have been financed by cutting other expenses. According to the Ministry of Finance, a comparison of changes in expenditures between FY2015 and FY2022 shows that economic cooperation expenditures and small- and medium-sized enterprise (SME) spending were reduced by more than 300 billion yen in total and defense spending increased by approximately 400 billion yen.

The options for securing financial resources are (1) reducing other expenditures, (2) increasing taxes, (3) borrowing (government bonds), or (4) some combination of the three. Cutting social security spending, the largest budget item, is unlikely to be realistic because of the strong possibility of opposition, especially from the elderly. 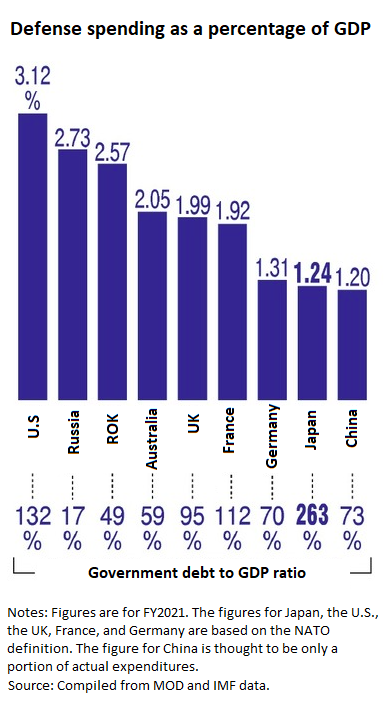 Raising taxes, however, is a viable option. The consumption tax, corporation tax, and income tax, which generate large amounts of tax revenues, are likely candidates. However, the consumption tax, including the local tax portion, is considered by law to be a source of revenue for social security, making it difficult to use for defense spending. The corporation tax currently generates about 500 billion yen per year at 1%, and the special income tax for reconstruction generates about 450 billion yen per year.

What about government bonds? Former Prime Minister Abe Shinzo, who strongly advocated increasing defense spending, said, “We should use government bonds.” However, Japan’s outstanding national debt is approximately 1,000 trillion yen, giving the nation the worst debt-to-GDP ratio in the world. A representative of Japan’s monetary authorities says, “A downgrade could happen at any time. There is no way government bonds can be used to finance defense spending.”

The Kishida administration’s approval rating has declined over such issues as the state funeral and its handling of the scandal related to the Family Federation for World Peace and Unification (former Unification Church). Government sources believe that “there is absolutely no way the Prime Minister could broach the topic of raising taxes.

As a result, the idea to “initially fund the increased defense spending by issuing government bonds” has emerged as a possible solution. Financial resources would initially be secured by issuing government bonds, and then it would be stipulated by law that the resources to repay the amount would be secured through future tax hikes and the like. A senior government official said, “In light of the current economic situation, it is possible that the timing of the tax hike would be moved back.” All eyes are on how the expert panel will handle such discussions in the days ahead.