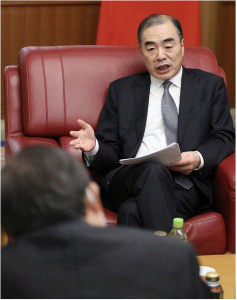 Chinese Ambassador to Japan Kong Xuanyou answers a question from chief editor Kanai Tatsuki (front) in an interview with the Tokyo Shimbun at the Chinese Embassy in Tokyo’s Minato Ward on Sept. 23.

In an interview with the Tokyo Shimbun on Sept. 23, Chinese Ambassador to Japan Kong Xuanyou repeatedly used the word “mutually” and underscored that bilateral efforts are indispensable for improving and developing the Japan-China relationship. Excerpts from the interview follow:

Question: Japan and China have been on both good and difficult terms during the five decades since the normalization of diplomatic ties. How do you see the current bilateral relationship?

Chinese Ambassador to Japan Kong Xuanyou: There were various sorts of trouble and problems in the past five decades. But it is undeniable that bilateral relations have developed significantly and provided significant benefits to the peoples of the two countries. On the other hand, it is also true that the issues of history, Taiwan, and territory have prevented the relationship from developing. We should go back to the starting point where we normalized diplomatic relations and move into the future by reflecting on the lessons learned in the past five decades and from history. We want to build a bilateral relationship appropriate to the new era and make it last for the next five decades.

Q: The coronavirus pandemic has prevented an in-person summit meeting from being held.

Q: The Chinese economy has achieved remarkable development in the past five decades. How do you evaluate Japan’s role in that?

Q: There are economic security discussions in both Japan and China that call for decoupling parts supply chains.

Ambassador Kong: Economic security is a critical issue and a government should consider how to protect its economy. But this concept tends to be abused, so both Japan and China are worried about it. What is important at this point is the quality implementation of the Regional Comprehensive Economic Partnership (RCEP). A free-trade agreement (FTA) between China, Japan, and South Korea, for which negotiations are continuing, is also an important issue.

Q: China is increasing its military buildup. The government is wary of Chinese warships’ activities near the Senkaku Islands (Diaoyu in Chinese).

Ambassador Kong: The development of China’s military capabilities is intended to protect legitimate security interests. Speaking from our standpoint, the Diaoyu are a territory that is an inherent part of China and daily patrols by China Coast Guard vessels in the waters near the islands is within the range of sovereignty. Japan should stop provocations by unidentified vessels. It is ordinary and normal for there to be disputes and differences of opinion between neighboring countries. We should appropriately manage [the islands] from a broad perspective.

Ambassador Kong: China had to take necessary measures in response to the U.S.’s provocation. China’s measures were intended to protect its own safety and territory, and they were also appropriate and legitimate. I’d also like to underscore that [the missiles] were not targeted at Japan.

Q: What are your expectations for Prime Minister Kishida Fumio? He hails from the Kochikai intraparty faction (currently the Kishida faction) [of the Liberal Democratic Party] as did former Prime Minister Ohira Masayoshi, who contributed to the Japan-China relationship.

Ambassador Kong: Prime Minister Kishida vowed to stress Japan’s relations with China more than once and we give him high marks to that. The improvement and development of the relationship are a common desire of the Japanese and Chinese peoples. Public opinion shows that Japanese people have a negative sentiment toward China but that many Japanese people think the bilateral relationship is extremely important. We hope Prime Minister Kishida will inherit the tradition of former Japanese leaders who made great contributions to the development of bilateral relations and realized a bright future for the bilateral ties.

Q: On the other hand, the Kishida government is discussing significantly increasing defense spending.

Ambassador Kong: China and Japan should be neither rivals nor threats to each other. But some people in Japan say the country should strengthen its defense capabilities on the pretext of a Chinese threat. We are deeply concerned about this.