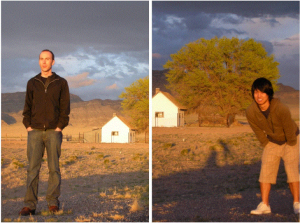 On Friday, judges at the Tokyo District Court will announce a decision on whether or not to grant long-term residency to U.S. citizen Andrew High, who has lived in Japan with his Japanese husband Kohei for over 10 years.

Legally married in the U.S. in 2015, the couple have been together since 2004. But despite the strength and longevity of their relationship, their legal status and limited ability to live together as a couple has throughout that time been a persistent source of stress and anxiety — both during their time living in Japan and in the U.S.

“Our 18th anniversary is coming up in about six weeks,” High said during an interview on Thursday. “During this entire time, we’ve never been able to really have a picture (of their future life together) beyond a year or so that felt secure.”

Prior to the legalization of same-sex marriage in the U.S. in 2015, High moved to Japan to be with Kohei in 2010, first on a student and then a business visa.

Throughout that period, he applied for long-term residency on multiple occasions in an attempt to guarantee a sense of security for their relationship, but his application was rejected each time.

In 2019, he decided to take action, filing a lawsuit against the government in an attempt to overturn the rejections, insisting that as the husband of a Japanese national he was entitled to the same legal protections afforded to heterosexual couples in the same position.

“My understanding of the Japanese Constitution is that you can’t have laws that treat different segments of your population differently, and for me and Kohei, this is the most important part of the case,” High said.

“I don’t feel that I have a personal claim to live in Japan or the qualifications to be in Japan independently. We just understand ourselves, as I think many gay and lesbian people do, as being essentially the same as heterosexuals.”

Overseas partners of Japanese citizens in heterosexual marriages may apply for extended residence status via either a spouse visa or a long-term residency visa. Similarly, same-sex couples married overseas may also apply for residency status via a designated activities visa — if one half of the couple already has a business or other type of visa.

However, the same does not apply to same-sex married couples when one half of the couple is Japanese.

While district courts in different parts of the country have come to different conclusions regarding the constitutionality of the issue, the Japanese government does not currently recognize same-sex marriages, restricting the marital protections of overseas citizens married to Japanese nationals — including on issues of residency.

A successful verdict in Friday’s court case would not only overturn the rejection of High’s application for long-term residence, but also, the plaintiffs and their supporters hope, set a precedent for the Immigration Bureau to respond to similar cases in the same way in future.

High described the anxiety for people in same-sex marriages living in Japan under uncertain visa conditions as being like living under their “own personal rain cloud” with the sun shining all around them.

“We’ve been under these conditions, which are particularly bad,” he said. “And now part of the goal of this case is not just for us, but to help anyone else who is in this particularly hideous situation.”

The verdict will be announced Friday at the Tokyo District Court in a courtroom open to the public. A meeting of lawyers explaining the details of the verdict will held afterward.