Editorial: Hosoda not qualified to serve as speaker of the Lower House 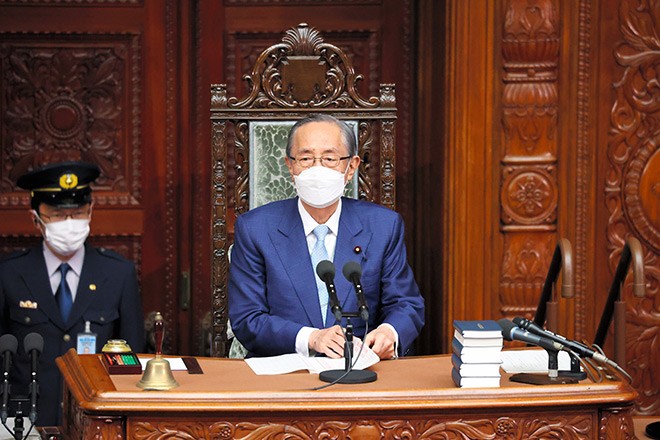 For weeks, Lower House Speaker Hiroyuki Hosoda avoided commenting on a raft of reports about his links with the Unification Church that emerged after the July 8 slaying of former Prime Minister Shinzo Abe.

On Sept. 29, Hosoda finally released a brief statement, printed on a single sheet of paper, acknowledging his ties to the church.

However, he has yet to address questions on the issue either at the Diet or in a news conference. The statement is a far cry from what he needs to do to fulfill his responsibility to explain his association with the religious organization.

Hosoda’s response shows no signs of pride or sense of responsibility as the speaker of the highest organ of state power.

Hosoda has a history of behaving in a way that raises serious questions about his qualification to serve as house speaker.

During this year’s ordinary Diet session, opposition parties proposed a motion of no-confidence against Hosoda, although it was voted down by the ruling camp, which maintains a dominant majority in the legislature. It is highly questionable whether Hosoda is fit for his job, which requires maintaining a fair and politically neutral stance.

In the statement he issued Sept. 29, Hosoda said he attended four meetings hosted by groups connected to the church, now known formally as the Family Federation for World Peace and Unification, in 2018 and 2019. He also admitted to serving as an executive member of associations of Diet members linked to the church.

But he offered no specifics about the meetings he attended. “I was invited, so I went and gave a speech,” Hosoda said. This indicates he had no qualms that he may have effectively endorsed the church’s shady activities.

“From now on I will handle the matter properly and not have a relationship with groups that are said to be socially problematic,” he said in the statement. But it is hard to take his words at face value.

From 2014 to 2021, Hosoda served as chairman of the Liberal Democratic Party faction led by Abe, which is said to have especially strong ties with the church.

In the church-related meeting in October 2019, which he said attended, Hosoda delivered a speech prior to a lecture by Hak Ja Han Moon, the church founder’s widow and its current leader. A video has emerged to show him saying, “I will immediately report to Prime Minister Abe about how this meeting was successful and what it was about.”

There are many questions Hosoda needs to answer to clarify the LDP’s ties with the church.

In response to opposition criticism about his lame attempts to explain his ties with the group, Hosoda has agreed to offer additional explanations about the matter in 10 days or so. It is vital for him to answer questions directly at the Lower House Committee on Rules and Administration or other venues instead of simply issuing another written statement.

LDP policy chief Koichi Hagiuda is another example of a senior ruling party politician who occupies an important post that requires a full explanation about his ties with the church but is failing to fulfill that duty.

Prior to the July Upper House election, Hagiuda visited a local church facility in his constituency with a prospective LDP candidate. The Asahi Shimbun and other news outlets have reported on a church follower claiming the church has been supporting Hagiuda for many years. These facts clearly indicate his close ties with the church. But he has yet to offer any detailed explanation about these revelations in public.

Among Cabinet members, Daishiro Yamagiwa, the state minister in charge of economic revitalization, acknowledged the facts concerning his ties with the church only after they were reported.

Prime Minister Fumio Kishida, who appointed Hagiuda and Yamagiwa to their respective posts, has reiterated that the party is severing its ties with the church. But his pledge cannot be trusted as long as he does not take serious action for real change.