U.S. envoy to Japan “saddened and shocked” by attack on ex-PM Abe

TOKYO — U.S. Ambassador to Japan Rahm Emanuel said Friday the United States is “saddened and shocked” by the shooting of former Japanese Prime Minister Shinzo Abe.   “The U.S. Government and American people are praying for the well-being of Abe-san, his family, and people of Japan,” Emanuel tweeted, adding Abe has been an unwavering ally of the United States END_OF_DOCUMENT_TOKEN_TO_BE_REPLACED 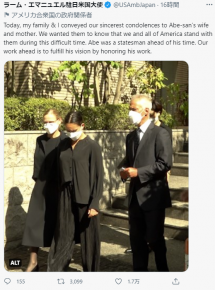 NHK, Sankei, and Jiji reported this morning on a tweet that Ambassador Emanuel posted late last night on the Upper House election. The outlets quoted him as saying: “Undeterred by the tragic events of the past few days, the Japanese people ensured their voices were heard by turning out to vote in the Upper House elections. As a former elected END_OF_DOCUMENT_TOKEN_TO_BE_REPLACED

Sankei reported online that U.S. Ambassador to Japan Emanuel posted a tweet this afternoon saying: “We are all saddened and shocked by the shooting of former Prime Minister Abe Shinzo. Abe-san has been an outstanding leader of Japan and unwavering ally of the United States. The U.S. Government and American people are praying for the well-being of Abe-san, his family, END_OF_DOCUMENT_TOKEN_TO_BE_REPLACED

According to the web-based Norimono News, which focuses on stories related to vehicles, Georgian Ambassador to Japan Teimuraz Lezhava posted a tweet on his recent ride on the Toden Arakawa Line, the only publicly operated tram line left in Tokyo. As a train buff himself, the Georgian official recommended in another tweet in the same thread that Ambassador Emanuel should END_OF_DOCUMENT_TOKEN_TO_BE_REPLACED

“Let freedom ring” is one of the most famous lines in American history. Martin Luther King Jr. moved the nation and the world when he cried, “Let freedom ring,” in his “I Have a Dream” speech. Whether watching clips of King on the steps of the Lincoln Memorial, or singing along with the classic tune “My Country ’Tis of Thee” END_OF_DOCUMENT_TOKEN_TO_BE_REPLACED

By Sakajiri Nobuyoshi, member of the Editorial Board   It was slightly after 3:30 p.m. on a weekday. U.S. Ambassador to Japan Rahm Emanuel finished his coffee at a Ginza café and walked to the Tokyo Metro Higashi-Ginza Station on the second basement floor of the Kabukiza Tower. He passed through the ticket gate, stood on the Hibiya Line platform, END_OF_DOCUMENT_TOKEN_TO_BE_REPLACED

Irei no Hi: Praying for those who lost their lives in Battle of Okinawa

On June 23, Okinawa commemorated “Irei no Hi [Okinawa Memorial Day]” by praying for the more than 200,000 people who were killed in the grueling land battles involving local residents in Okinawa during World War II. The Okinawa Memorial Service for All War Dead was held (sponsored by Okinawa Prefecture and Okinawa Prefectural Assembly) at Peace Memorial Park in Mabuni, END_OF_DOCUMENT_TOKEN_TO_BE_REPLACED

The Japanese edition of the South Korean daily JoongAng took up President Yoon’s appointment of former Director of the Korea National Diplomatic Academy Yun Duk-min as his top representative in Japan, expressing hope that the ambassador-designate will capitalize on his rich expertise in Japan to improve the ROK’s soured ties with Tokyo. The outlet noted that the incumbent Ambassador Kang END_OF_DOCUMENT_TOKEN_TO_BE_REPLACED 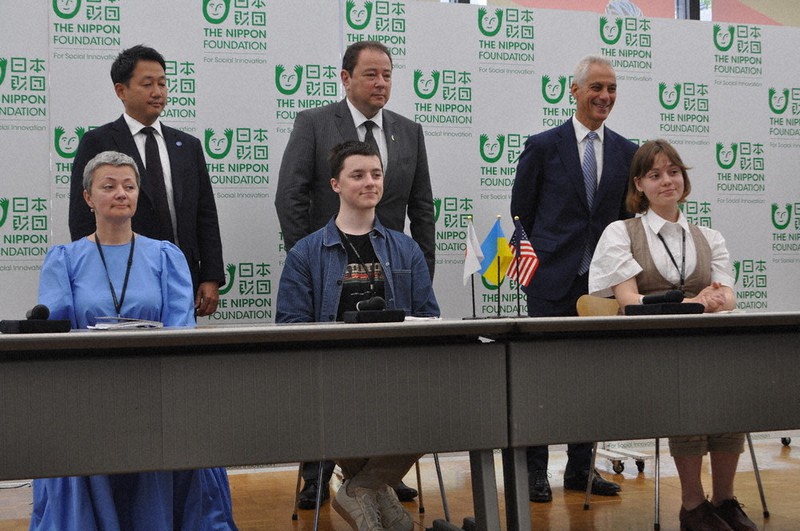