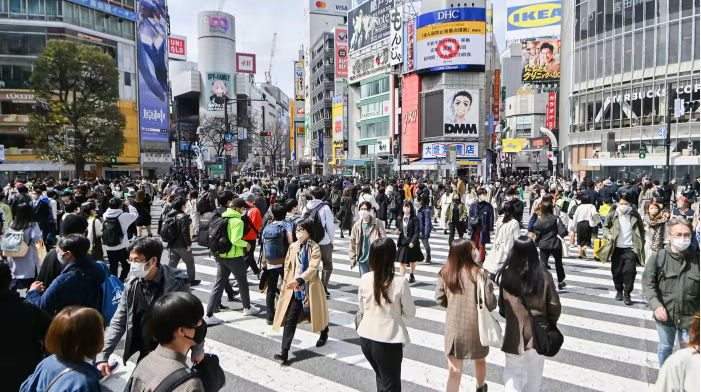 Japan February GDP up 0.3% on steady exports to China: JCER

TOKYO — From bread and pasta to frozen items, Japanese food manufacturers are raising prices at a pace not seen in years and having more success at persuading retailers to pass inflation costs onto consumers, a Nikkei study shows.

Japan says prices are rising for the 1st time since 2020

YUKI FUJITA, YOHEI MATSUO and MISA HAMA, Nikkei staff writers   TOKYO — Having long grappled with the problem of deflation, Japan is now growing alarmed about the opposite problem — inflation triggered by war in Ukraine.   The government’s monthly economic report for March released Friday stated that “recent consumer prices are rising moderately.” No gains had been cited since the February 2020 END_OF_DOCUMENT_TOKEN_TO_BE_REPLACED

TOKYO — Japan’s land prices rose for the first time in two years in 2022, with the national average up 0.6%, according to the officially assessed land value announced by the Ministry of Land, Infrastructure, Transport and Tourism on Tuesday.   The trend reflects a gradual economic recovery after the shock caused by the COVID-19 pandemic. Solid housing demand, spurred END_OF_DOCUMENT_TOKEN_TO_BE_REPLACED

Sankei and Yomiuri highlighted the yen’s continued slide against the dollar in response to the crisis in Ukraine, projecting that the Japanese currency’s value may plunge to its lowest level in seven years at any moment also partly due to the Fed’s decision to end its zero-interest rate policy. The paper attributed the decline to the country’s decades-long economic woes that END_OF_DOCUMENT_TOKEN_TO_BE_REPLACED

YOHEI MATSUO, Nikkei staff writer   TOKYO — The coronavirus pandemic has dealt a heavy blow to Japan’s labor market, with people without a job for at least a year surging to the highest levels since the global financial crisis triggered by the collapse of Lehman Brothers more than a decade ago.   Long-term unemployment reached 640,000 in the October-December term END_OF_DOCUMENT_TOKEN_TO_BE_REPLACED

Tokyo, March 8 (Jiji Press)–Sentiment among so-called economy watchers in Japan, or people working in industries sensitive to changes in economic trends, worsened for the second straight month in February, a government survey showed Tuesday.   The seasonally adjusted index on economy watchers’ sentiment about current economic conditions dropped 0.2 point from the previous month to 37.7, weighed down by END_OF_DOCUMENT_TOKEN_TO_BE_REPLACED

Tokyo, March 2 (Jiji Press)–Revised Japanese government data, due out on March 9, are expected to show the country’s economy expanded at an annualized rate of 5.6 pct in October-December 2021, according to private think tanks.   The figure is the average estimate among 10 private-sector think tanks. A preliminary report published last month put the growth rate of gross END_OF_DOCUMENT_TOKEN_TO_BE_REPLACED

Optimism for the future of an economy that was picking up has waned amid the sixth wave of the novel coronavirus.   To prevent the economy from slowing down again, the government needs to keep an eye on risks such as high commodity prices.   The preliminary quarterly estimates of real gross domestic product for October-December 2021 indicates an annualized END_OF_DOCUMENT_TOKEN_TO_BE_REPLACED

All national dailies reported on the Cabinet Office announcement on Tuesday that Japan’s economy in the October-December quarter last year grew 1.3% from the previous quarter, or an annualized rate of 5.4%, as personal consumption recovered following the lifting of the COVID-19 state of emergency. The nation’s economy grew 1.7% in 2021, marking the first expansion in three years. However, END_OF_DOCUMENT_TOKEN_TO_BE_REPLACED