Japanese authorities on Wednesday proposed that the safety of nuclear plants aged 30 years or older be checked at least once a decade to obtain approval for continued operation. The proposal from the Nuclear Regulation Authority came as the government seeks to scrap a rule that limits the operating life of reactors to a maximum of 60 years.   The END_OF_DOCUMENT_TOKEN_TO_BE_REPLACED 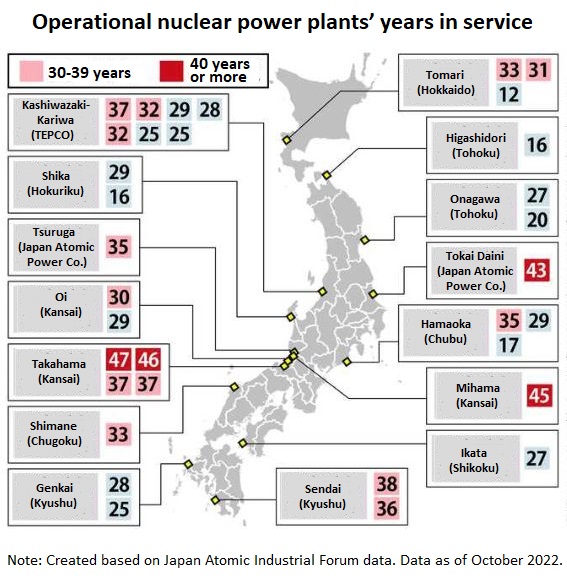 Takahama No. 4 reactor to be restarted on Nov. 6

On Nov. 1, Kansai Electric Power Co. announced that the No. 4 reactor at the Takahama Nuclear Power Plant will be restarted on Nov. 6. It will go into full operations after regular inspections are completed on Dec. 1. (Abridged)

All national dailies reported that the GOJ decided on Tuesday to ask individual households and commercial enterprises across Japan to conserve electricity from Dec. 1 until March 31 to ensure stable power supplies during the winter when demand is expected to soar. The papers said this is the first time in seven years for the government to make a nationwide END_OF_DOCUMENT_TOKEN_TO_BE_REPLACED

NHK spotlighted the disclosure by Economic and Fiscal Policy Minister Nishimura on Tuesday morning that on Monday he requested the Japanese companies who have maintained stakes in the Sakhalin-1 energy development initiative in the Russian Far East to continue to do so following Russia’s establishment of a new firm to run it. The Japanese investors are required to decide whether END_OF_DOCUMENT_TOKEN_TO_BE_REPLACED

GOJ to ask public and businesses to conserve energy during winter

Kyodo reported that the GOJ decided today to ask individual households and commercial enterprises across Japan to conserve electricity beginning from Dec. 1 to ensure stable power supplies during the winter when demand is expected to soar. This is the first time in seven years for the government to make a nationwide request for power conservation ahead of the winter END_OF_DOCUMENT_TOKEN_TO_BE_REPLACED

TOKYO — The Japanese government has decided to remain involved in the formerly Exxon-led Sakhalin-1 oil and gas project in Russia, Nikkei has learned, as it seeks a stable supply of energy despite international sanctions on Moscow over its invasion of Ukraine.   ExxonMobil, which held a 30% stake in Sakhalin-1, announced in March that it would withdraw from END_OF_DOCUMENT_TOKEN_TO_BE_REPLACED

An Asahi Shimbun survey revealed that 11 Japanese power companies spent a total of at least 5.4 trillion yen on safety measures at nuclear power plants in 2022. Although this is the same as the amount they spent in 2021, some companies have not included costs for antiterrorism facilities. Since nuclear power plants are required to have such facilities, the END_OF_DOCUMENT_TOKEN_TO_BE_REPLACED 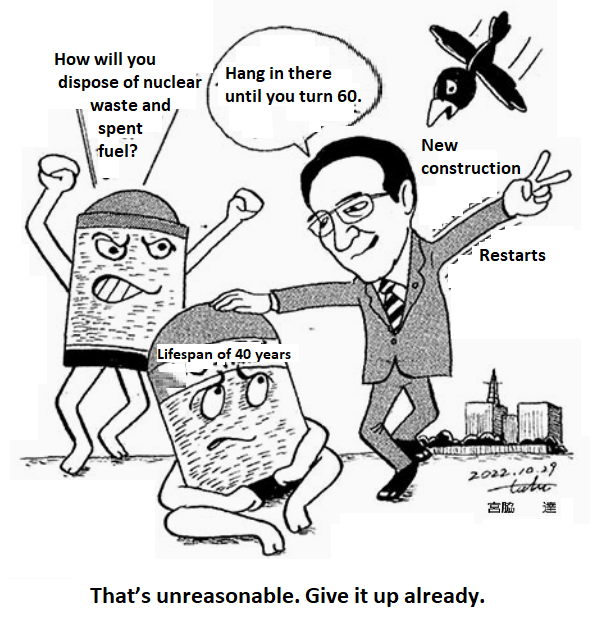 Yamanaka Shinsuke, chair of the Nuclear Regulation Authority (NRA), said in an interview with Nihon Keizai Shimbun: “One possible guideline is to approve [nuclear power plants that have been in operation longer than 60 years] every 10 years.” Yamanaka said the reasoning behind this criterion is that it would be difficult to see the effects of aging in nuclear power END_OF_DOCUMENT_TOKEN_TO_BE_REPLACED