JADA NAGUMO and RURIKA IMAHASHI, Nikkei staff writers   TOKYO — As Japan takes steps to reopen borders for business travelers and students, a number of companies are taking the opportunity to ramp up recruitment of foreign talent amid a shrinking labor force.   Messaging app provider Line is gradually resuming midcareer recruitment from overseas while also looking to hire END_OF_DOCUMENT_TOKEN_TO_BE_REPLACED

Over 370,000 foreigners waiting to enter Japan due to COVID curbs

TOKYO — There are more than 370,000 foreign nationals who cannot enter Japan despite having precertification for residence status as of Oct. 1 due to border controls aimed at limiting the spread of COVID-19, Nikkei has learned.   About 70% of those who cannot come to Japan are technical intern trainees and international students. While many countries are taking steps END_OF_DOCUMENT_TOKEN_TO_BE_REPLACED

New chief a compromise by two disputing groups in Rengo

Labor unions are moving away from their normal political allies in the current Lower House election over policy disagreements about how the nation should proceed with nuclear power generation.   Traditionally, the electric power companies have supported candidates from the ruling coalition while the unions affiliated with such companies backed opposition party candidates.   But with the opposition Constitutional Democratic END_OF_DOCUMENT_TOKEN_TO_BE_REPLACED

MANABU KAME and TSUBASA YODA, Nikkei staff writers   TOKYO — A long-serving opposition lawmaker backed by Toyota Motor’s labor union will not run in Japan’s lower house election on Oct. 31, a decision that comes as the auto industry considers its relationship with the government in an era of stricter environmental restrictions.   Shinichiro Furumoto, who represented Aichi Prefecture’s END_OF_DOCUMENT_TOKEN_TO_BE_REPLACED

Tomoko Yoshino, a veteran labor union leader, has become the new chief of Rengo, the Japanese Trade Union Confederation, taking the helm of the nation’s largest labor organization amid declining union membership rates and deepening political divisions within the body.    Yoshino is the first woman to head Rengo, which was founded in 1989 as the umbrella organization of labor END_OF_DOCUMENT_TOKEN_TO_BE_REPLACED

TSUBASA YODA, Nikkei staff writer   TOKYO — The Japanese Trade Union Confederation, known as Rengo, has been hoping to regain political influence for some time. The country’s largest national labor organization supports the largest opposition party, the Constitutional Democratic Party, and another opposition party, the Democratic Party for the People, but given their low support ratings, they are unlikely END_OF_DOCUMENT_TOKEN_TO_BE_REPLACED

By Fiujisaki Mari, staff writer   The first woman to chair Japan’s largest labor organization decided she would step into the role after listening to her own advice to young women: “Don’t miss an opportunity.”   Tomoko Yoshino, 55, became the eighth head of Rengo, the Japanese Trade Union Confederation, on Oct. 6.   Yoshino was previously one of the END_OF_DOCUMENT_TOKEN_TO_BE_REPLACED

All national dailies wrote that the Japanese Trade Union Confederation, also known as Rengo, selected Yoshino Tomoko as its new president on Wednesday. This is the first time for Japan’s largest labor organization since its establishment in 1989 to select a woman president. Yoshino, who leads a labor union mainly representing small and medium-sized manufacturers, will serve a two-year term. END_OF_DOCUMENT_TOKEN_TO_BE_REPLACED 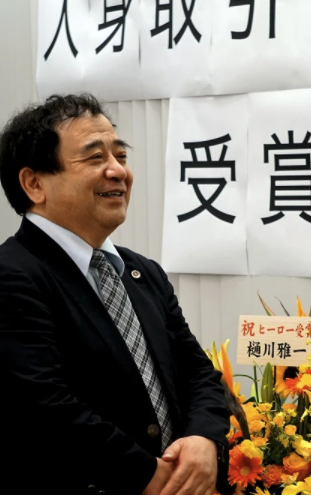 By Sawaji Takehiko, staff writer   Shoichi Ibusuki humbly calls himself “a labor movement activist wearing a lawyers’ pin,” but the U.S. government has gone further and labeled him a “hero.”   Ibusuki became the second Japanese named a Trafficking in Persons Report Hero by the U.S. State Department for his long battle protecting the rights of foreign technical trainees END_OF_DOCUMENT_TOKEN_TO_BE_REPLACED