Nikkei reported online on Thursday on Ambassador Emanuel’s video message for a virtual symposium on outer space organized by the business daily. The Ambassador underscored that Japan is an “indispensable partner” in the Artemis lunar probe initiative, which he projected will “show us a different picture than the Apollo program did.” Ambassador Emanuel referred to Japan’s desire to send one END_OF_DOCUMENT_TOKEN_TO_BE_REPLACED

Mitsubishi Electric Corp. unveiled its new Daichi-3 Earth-observation satellite to the press at its Kamakura Works facility in Kanagawa Prefecture on Thursday.   The new satellite will provide an upgrade of the resolution of images taken from space. It will be carried in the next flagship domestically manufactured H-3 rocket, which the Japan Aerospace Exploration Agency, or JAXA, aims to END_OF_DOCUMENT_TOKEN_TO_BE_REPLACED

NHK reported on a JAXA announcement yesterday that the launch of its lunar probe SLIM, originally scheduled to take place by March of next year, will be pushed back to prioritize the launch of an H-3 rocket that is currently under development. The probe is expected to be used in the U.S.-led Artemis initiative aimed at sending astronauts to the END_OF_DOCUMENT_TOKEN_TO_BE_REPLACED

By RYOSUKE MATSUZOE and TOMOYUKI ENDO, Nikkei staff writers TOKYO — Water has been found in an asteroid sample collected by Japan’s Hayabusa2 space probe, marking the first such discovery and shedding light on how the Earth’s oceans may have formed.   The findings were published Thursday in the journal Science by research teams from Tohoku University, the Japan Aerospace Exploration END_OF_DOCUMENT_TOKEN_TO_BE_REPLACED

By Nikkei staff writers   TOKYO — Honda Motor will join the development of a lunar rover by the Japan Aerospace Exploration Agency (JAXA), Nikkei has learned.   Toyota Motor has also been cooperating with JAXA on this project. The agency hopes to boost the development of the vehicle by utilizing Honda’s fuel cell technology.   The vehicle will be launched END_OF_DOCUMENT_TOKEN_TO_BE_REPLACED

TOKYO – Japan’s space agency said Thursday it aims to launch a new flagship H3 rocket within fiscal 2022, after its first flight was postponed twice due to the discovery of defects.   The problems, such as with the rocket’s engine, have been solved through steps including a change in its design, the Japan Aerospace Exploration Agency said, allowing for END_OF_DOCUMENT_TOKEN_TO_BE_REPLACED

Saturday’s Yomiuri, Mainichi, and Sankei wrote that NASA announced on Friday that its SpaceX Crew Dragon carrying Japan’s Wakata Koichi and three other astronauts will launch from the Kennedy Space Center in Florida on Oct. 3. The astronauts will stay at the International Space Station for about six months, and this will be Wakata’s fifth spaceflight.

The Russian invasion of Ukraine is casting a shadow on the International Space Station (ISS), a symbol of international cooperation. Russia has expressed its intention to leave the ISS after 2024. It is clear Russia is intensifying pressure on Western countries as they are tightening economic sanctions. In addition, China is rising [as a space superpower], thus ushering in a END_OF_DOCUMENT_TOKEN_TO_BE_REPLACED

By TOMOYUKI ENDO and RYOSUKE MATSUZOE, Nikkei staff writers   TOKYO — A sample of material taken from an asteroid by Japan’s Hayabusa2 probe offers a clue to how organic matter found in meteorites on Earth could have survived without burning up in the atmosphere.   The material from the carbonaceous chondritic asteroid named Ryugu contains unidentified organic compounds mixed with coarse-grained silicate minerals END_OF_DOCUMENT_TOKEN_TO_BE_REPLACED 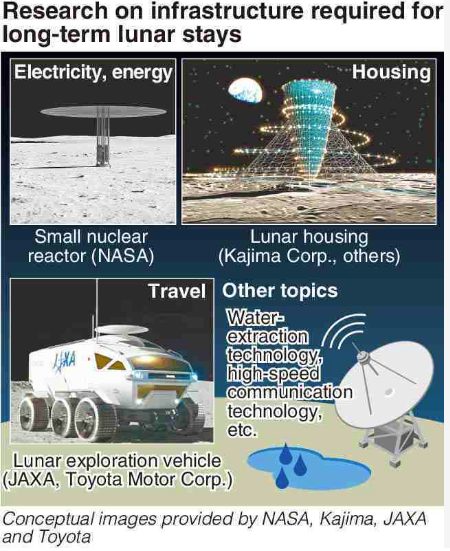 The U.S.-led Artemis Program is shooting for the moon. The international lunar exploration program has a broad range of objectives, including the return of humans to the surface of Earth’s closest celestial neighbor for the first time since the Apollo 17 mission in 1972.   Research and development to install lunar infrastructure such as electricity, water and housing is currently END_OF_DOCUMENT_TOKEN_TO_BE_REPLACED