Bintou Kujabi Jallow is the owner of a Nagoya restaurant that serves the cuisine of the Republic of the Gambia, her home country. But her “true work” is as Gambia’s honorary consul general. Bintou says that she opened a restaurant because she “cannot support Gambians in need just through her work as honorary consul general because it is unpaid.”   END_OF_DOCUMENT_TOKEN_TO_BE_REPLACED

At a press conference held on Sept. 14, Minister of State for Science and Technology Policy Inoue Shinji announced the key points of “global health strategies” to establish a public health system in emerging and developing countries. The government has selected India, Vietnam, and Ghana as assistance recipients.   In light of the spread of COVID-19, Japan will provide the END_OF_DOCUMENT_TOKEN_TO_BE_REPLACED 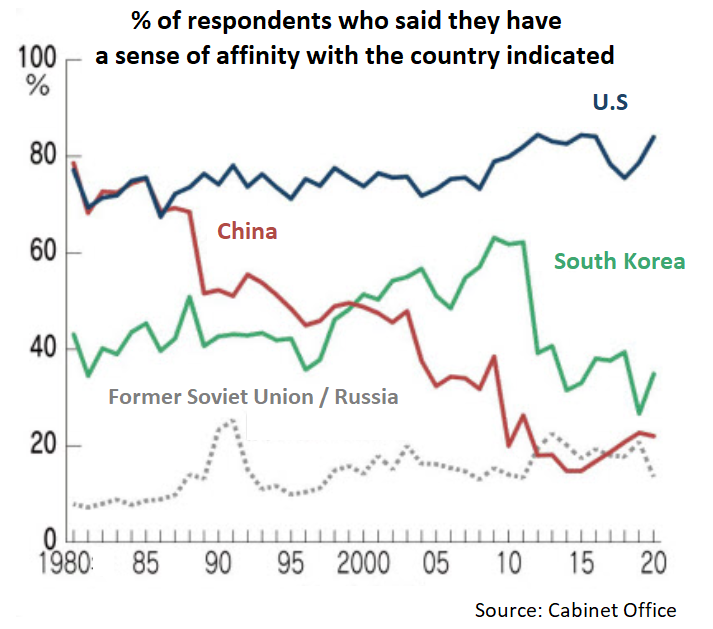 The government conducts a public opinion poll that asks respondents how close they feel to various countries and regions around the world. In 1980, 79% of respondents said they felt an affinity with China, but 40 years later, in 2020, only 22% – one quarter of the earlier figure – said they felt close to China.   These figures come END_OF_DOCUMENT_TOKEN_TO_BE_REPLACED

KOSUKE TOSHI and TATSURO MIYAZUMI, Nikkei staff writers   OSAKA — Japan’s Daikin has kicked off an air conditioning “subscription” service in Africa that let’s users turn on the AC — only on days they need it — through a smartphone app.   With no need to purchase the machine itself, users pay an initial installation fee of around $77 and roughly END_OF_DOCUMENT_TOKEN_TO_BE_REPLACED

KEN MORIYASU, Nikkei Asia chief desk editor   NEW YORK — News that Tanzania will revive a $10 billion port project in the town of Bagamoyo has ignited speculation that China, the project’s main investor, is looking to establish an additional dual-use foothold on the East African coast, a move that would greatly enhance Beijing’s strategic aims in the region.   END_OF_DOCUMENT_TOKEN_TO_BE_REPLACED

TOKYO — Japan’s Cabinet approved Friday a one-year extension of Self-Defense Forces personnel to the headquarters of the U.N. peacekeeping mission in South Sudan until May 31 next year.   The move came after the U.N. Security Council decided in March to extend by one year the mandate of the U.N. mission in South Sudan, or UNMISS.   With the END_OF_DOCUMENT_TOKEN_TO_BE_REPLACED

Kenya opened a railway line funded by loans from China but has run up huge deficits in the process. Wedge interviewed a living witness in the Japan International Cooperation Agency (JICA) who has been watching trends in aid to Africa since the Tokyo International Conference on African Development (TICAD) was initiated by Japan in 1993.     Kei Yoshizawa, senior advisor to the director general (development policy analysis for TICAD) at the Planning and TICAD Process Division of JICA’s Africa Department, made the following remarks END_OF_DOCUMENT_TOKEN_TO_BE_REPLACED

The Africa Society of Japan, a general incorporated association working to promote economic and cultural exchange between Japan and Africa, held a symposium in Tokyo on March 16 to commemorate the 60th anniversary of its founding. Koichiro Matsuura, the association’s chairman and former director-general of the United Nations Educational, Scientific and Cultural Organization (UNESCO), said in his keynote speech: “China END_OF_DOCUMENT_TOKEN_TO_BE_REPLACED

NEW YORK — On Feb. 24, the Japanese government announced that it would provide grant aid of 440 million yen to Somalia through the United Nations to support the African nation’s police. The grant aid is intended to strengthen [Somalia’s] ability to dispose of explosives used by Islamic extremists, and it will be used to conduct drills and build training END_OF_DOCUMENT_TOKEN_TO_BE_REPLACED