Twenty-seven years have passed since the 1995 Great Hanshin Earthquake that devastated the western port city of Kobe.   By coincidence, this year’s Jan. 17 anniversary of the magnitude-6.9 temblor came on the heels of a massive underwater volcanic eruption near the South Pacific island nation of Tonga. The eruption caused tsunami and tide level changes in many parts of the END_OF_DOCUMENT_TOKEN_TO_BE_REPLACED

The Japan Coast Guard (JCG) confirmed there were two China Coast Guard vessels in the contiguous zone outside Japan’s territorial waters near the Senkaku Islands (Ishigaki City, Okinawa Prefecture) on Jan. 17. This was the 21st consecutive day that Chinese government ships were sighted near the Senkakus. According to the 11th Regional Coast Guard Headquarters (Naha), the JCG issued a END_OF_DOCUMENT_TOKEN_TO_BE_REPLACED

YURI MOMOI, Nikkei China bureau chief   BEIJING — Friction over trade and security between the U.S. and China has now spilled into the realm of ideology such as democracy, freedom and human rights. Countries around the world — whether democratic or autocratic — face widening economic and social divides, Japan included. Which camp wins the ideological contest will be END_OF_DOCUMENT_TOKEN_TO_BE_REPLACED

Editorial: Tonga eruption must serve as reminder of tsunami’s dangers

The cardinal rule for evacuating from tsunami is to flee if a tremor is felt. However, tsunami can come even if there is no tremor. It is hoped that people will pay attention to the diverse range of natural disasters and renew their awareness of the threat they pose.   A massive underwater volcanic eruption occurred off the South Pacific END_OF_DOCUMENT_TOKEN_TO_BE_REPLACED

Nikkei reported on Monday evening that Defense Minister Kishi announced that North Korea fired two ballistic missiles toward the Sea of Japan on Monday. The first was launched at 8:49 a.m. and the second at 8:52 a.m. Kishi reportedly added that the missiles were believed to have splashed down outside Japan’s EEZ. According to Nikkei, the GOJ analyzes that the missiles travelled about 300 km at a maximum altitude of 50 km. Prime Minister END_OF_DOCUMENT_TOKEN_TO_BE_REPLACED

North Korea fires what appears to be ballistic missile

NHK reported that the Japan Coast Guard announced at 2:55 p.m. that North Korea fired what appeared to be a ballistic missile. The network said that according to an MOD source, the projectile apparently splashed down outside Japan’s EEZ in the Sea of Japan. The JCC is reportedly calling on ships in the area to exercise caution. The network also END_OF_DOCUMENT_TOKEN_TO_BE_REPLACED

The Japan Coast Guard (JCG) confirmed there were three China Coast Guard vessels in the contiguous zone outside Japan’s territorial waters near the Senkaku Islands (Ishigaki City, Okinawa Prefecture) on Jan. 13. This was the 17th consecutive day that Chinese government ships were sighted near the Senkakus. According to the 11th Regional Coast Guard Headquarters (Naha), one of the vessels END_OF_DOCUMENT_TOKEN_TO_BE_REPLACED 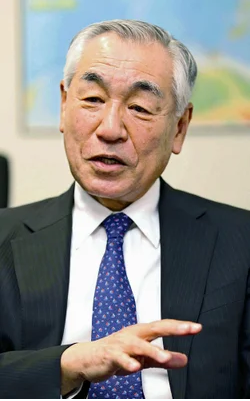 An interview with Oriki Ryoichi, former Chief of Staff, Joint Staff, conducted by Kuriyama Hirotaka   U.S.-China competition   The strategic competition between the U.S. and China will intensify further this year. The U.S. will have midterm elections, and Japan and China are set to mark the 50th anniversary of the normalization of their diplomatic relations. It will be important END_OF_DOCUMENT_TOKEN_TO_BE_REPLACED

(An interview with Kokubun Ryosei, former President of the National Defense Academy, by Amano Yusuke)   After the Cold War, people thought that the international order would stabilize with increasing globalization and more interdependence among nations. As we can see from recent opposition to globalization and the expansion of populism, the world moves on a country-by-country basis. The nation-state is END_OF_DOCUMENT_TOKEN_TO_BE_REPLACED