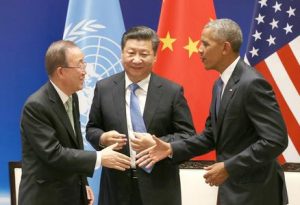 All Sunday papers reported extensively on a joint announcement by the U.S. and the Chinese governments that they have ratified the Paris climate change agreement, underscoring that the landmark pact designed to curb global warming is bound to take effect this year as a result of the two largest greenhouse gas emitters’ renewed commitment to addressing climate change. Noting that END_OF_DOCUMENT_TOKEN_TO_BE_REPLACED

Monday’s Sankei wrote that a number of U.S. media outlets, including CNN, have reported that David Sneddon, who went missing in China in August 2004, was apparently abducted and taken to North Korea by DPRK agents. Citing a Kyodo story that reported on remarks made by a representative of a South Korean activist group, the American news organizations claimed that END_OF_DOCUMENT_TOKEN_TO_BE_REPLACED

In his address at the Eastern Economic Forum on the afternoon of Sept. 3, Russian President Vladimir Putin proposed launching an intergovernmental working group among Russia, Japan, and South Korea to facilitate a plan to build power grids connecting the three countries. With regard to exporting electricity to Japan, South Korea, and other Asian countries, Putin noted that “Russia is END_OF_DOCUMENT_TOKEN_TO_BE_REPLACED

Editorial: Do Obama, Xi regret their summit talks didn’t do much for Asian stability?

Given that both sides seemingly went to pains to give the appearance of getting along while putting aside pending questions over China’s high-handed maritime advances, this cannot be described as a relationship between responsible major powers.   U.S. President Barack Obama has held talks with Chinese President Xi Jinping on the sidelines of the summit meeting of the Group of END_OF_DOCUMENT_TOKEN_TO_BE_REPLACED

BANGKOK (Kyodo) — The chairman’s statement to be issued after a summit of Southeast Asian leaders in Laos this week will avoid any mention of the landmark July ruling by an international tribunal that rejected China’s vast claims to most of the South China Sea, an ASEAN source said Sunday.   Leaders of the 10-member Association of Southeast Asian Nations END_OF_DOCUMENT_TOKEN_TO_BE_REPLACED

Final arrangements being made for Japan-South Korea summit meeting

On Sept. 1, the Blue House announced that it is in the final stages of arranging a summit meeting between Prime Minister Shinzo Abe and South Korean President Park Geun-hye for the sidelines of the ASEAN Summits and Related Summits to be held Sept. 6–8 in Laos.

TOKYO — The 16 nations negotiating an Asia-Pacific trade pact effectively decided Thursday to push back their target of reaching an agreement this year amid the gaps remaining on tariff issues.   Leaders of the countries — the 10 members of the Association of Southeast Asian Nations along with Japan, South Korea, China, India, Australia and New Zealand — will discuss the Regional END_OF_DOCUMENT_TOKEN_TO_BE_REPLACED

The leader of a South Korean group advocating for abduction victims revealed that an American man who went missing in China 12 years ago was abducted by North Korea and is currently teaching English there.

Japan, China plan to agree on establishment of communication mechanism this year

Sankei gave top play to a report saying that it learned from several sources connected to Japan-China relations that the Japanese and Chinese governments are making final arrangements to reach a formal agreement by the end of this year on establishing a maritime and air communication mechanism aimed at preventing unforeseen incidents in the East China Sea. The paper conjectured END_OF_DOCUMENT_TOKEN_TO_BE_REPLACED

Thursday evening’s Asahi and Yomiuri wrote that South Korea’s Foreign Ministry confirmed on Sept. 1 that the Reconciliation and Healing Foundation for former comfort women has received 1 billion yen from the Japanese government. Forty-six comfort women who are still alive will receive about 10 million yen each, while the families of comfort woman who died before the Japan-ROK agreement END_OF_DOCUMENT_TOKEN_TO_BE_REPLACED