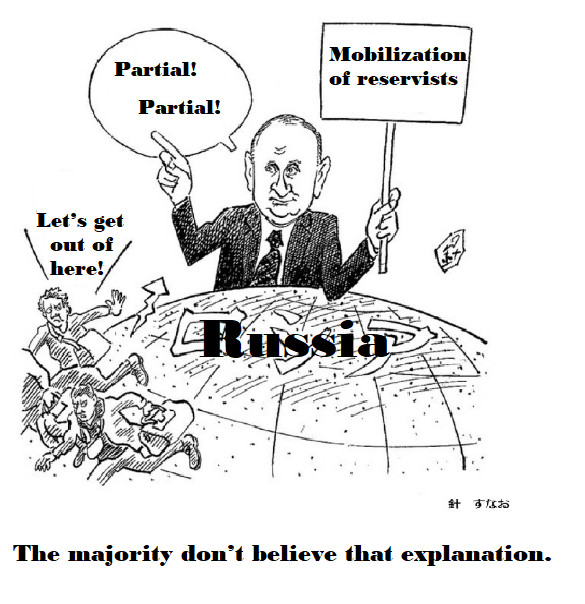 Nikkei ran an interview with British Foreign Secretary Cleverly that was conducted on the margins of the state funeral for former Prime Minister Abe in Tokyo yesterday. The official said the importance of the Indo-Pacific region is growing following the Russian invasion of Ukraine because Japan and other Asian countries are playing a greater role as alternative suppliers of goods END_OF_DOCUMENT_TOKEN_TO_BE_REPLACED

NHK reported that the GOJ approved at a cabinet meeting today additional sanctions on Russia in light of the nation’s ongoing military invasion in Ukraine. According to the network, Japan will add 21 Russian research institutes and shipyards to the list of entities subject to the export ban and will embargo exports to Russia of additional goods related to chemical END_OF_DOCUMENT_TOKEN_TO_BE_REPLACED

NEW YORK – Japanese Prime Minister Fumio Kishida on Thursday condemned what Russia calls “referendums” in Moscow-controlled regions of Ukraine and said Russia must never use or threaten to use nuclear weapons, according to the Japanese Foreign Ministry.   Kishida’s remarks came during a meeting with Ukrainian Prime Minister Denys Shmyhal in New York ahead of the start of voting Friday END_OF_DOCUMENT_TOKEN_TO_BE_REPLACED

NHK reported that Secretary of State Blinken, Japanese Foreign Minister Hayashi, and South Korean Foreign Minister Park held trilateral talks for about 50 minutes in New York on Thursday, saying that the three officials expressed serious concern over North Korea’s escalating nuclear and missile development and reaffirmed their nations’ strong and resolute response to any further provocations by Pyongyang. The END_OF_DOCUMENT_TOKEN_TO_BE_REPLACED

NHK’s weeknight news show “Kokusai Hodo (International Report)” aired on Thursday evening (Japan Time) its one-on-one interview with U.S. Ambassador to NATO Julianne Smith that was conducted at the NATO Headquarters in Brussels on Thursday. The network said that concerning Russian President Putin’s announcement in his televised address to the nation on Wednesday of the partial mobilization of military reserves, END_OF_DOCUMENT_TOKEN_TO_BE_REPLACED

Editorial: Russia must not repeat its follies with referendums in occupied regions

It was tantamount to an admission by Russian President Vladimir Putin himself that Russia’s unilateral invasion of Ukraine has been met with an unexpected counteroffensive and its military is on the back foot.   In his televised address to the Russian public, Putin announced that he had issued a partial mobilization order to complement the number of soldiers sent to END_OF_DOCUMENT_TOKEN_TO_BE_REPLACED

NHK reported that Prime Minister Kishida told Ukrainian Prime Minister Shmyhal at their bilateral talks in New York on Thursday that Japan will continue to support Ukraine in cooperation with the international community including its G7 partners through sanctions on Russia and other means to stop the war as soon as possible. Kishida condemned Russia’s plan to hold referendums in END_OF_DOCUMENT_TOKEN_TO_BE_REPLACED

NHK reported on a G7 foreign ministerial meeting held on the sidelines of the UN General Assembly in New York on Wednesday. The participants reportedly expressed concern about Russian President Putin’s recent remarks on the possible use of nuclear weapons in Ukraine and the mobilization of army reservists. They affirmed mutual unity and coordination in continuing to support Kyiv and END_OF_DOCUMENT_TOKEN_TO_BE_REPLACED