WASHINGTON — The American and Taiwanese militaries should ramp up sharing of tactical intelligence to better prepare for the threat of a potential Chinese invasion of the island, said U.S. Rep. Steve Chabot, a leading figure in recent congressional efforts to turn the White House’s foreign policy focus more toward Asia.   In an online interview with Nikkei on Wednesday, END_OF_DOCUMENT_TOKEN_TO_BE_REPLACED

By Watanabe Tsuneo, senior research fellow, Sasakawa Peace Foundation   With Russia’s invasion of Ukraine and China’s military buildup in mind, holding concrete discussions on foreign and national security is indispensable for the ruling and opposition parties.   The United States no longer possess overwhelming power on either the economic or military fronts. With East Asia facing a more dire END_OF_DOCUMENT_TOKEN_TO_BE_REPLACED

By Imamura Takashi, director of Marubeni Research Institute   Continuity is an important element in foreign policy. If Japan is not consistent in foreign policy, it will not be able to win the international community’s trust.   China has become a strategic competitor. As the direction of globalization has changed, [there are countries that] only think about their own gain, END_OF_DOCUMENT_TOKEN_TO_BE_REPLACED 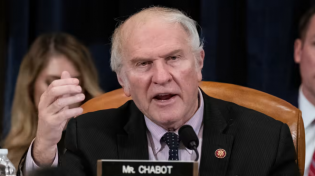 Nikkei ran its recent online interview with Rep. Steve Chabot, the ranking Republican on the House Foreign Affairs Committee’s subcommittee on Asia, the Pacific, Central Asia and nonproliferation, a panel with substantial sway over legislation and budget decisions related to the region. Rep. Chabot reportedly said that the militaries of the United States and Taiwan should ramp up sharing of END_OF_DOCUMENT_TOKEN_TO_BE_REPLACED

All national papers highlighted the summit between President Biden, Prime Minister Kishida, and South Korean President Yoon held on the margins of the NATO conference in Madrid on Wednesday. The three officials agreed to step up security coordination to curb North Korea’s nuclear and missile development. At the outset, President Biden expressed hope for “stronger trilateral coordination through the continuation END_OF_DOCUMENT_TOKEN_TO_BE_REPLACED

NHK reported this morning that White House National Security Adviser Sullivan told the press on Tuesday that the leaders of the United States, Japan, and South Korea will hold a summit on the sidelines of the NATO summit on Wednesday to discuss ways to respond to North Korea’s ongoing nuclear and missile development programs. He also reportedly said the three END_OF_DOCUMENT_TOKEN_TO_BE_REPLACED

Nikkei, Yomiuri, Asahi, and Mainichi reported that President Biden and Prime Minister Kishida held a brief meeting on the sidelines of the G7 summit in Elmau, Germany, on Monday. The two leaders reportedly agreed to cooperate in setting a price cap on Russian crude oil. They also reportedly confirmed to work closely toward the first economic “2+2” meeting slated for END_OF_DOCUMENT_TOKEN_TO_BE_REPLACED

YUKIHIRO SAKAGUCHI, Nikkei staff writer   WASHINGTON — In the event of a conflict in Taiwan, Japan could serve an important logistical role for the U.S., former Deputy Secretary of State Richard Armitage told Nikkei. “I think, if there were a Taiwan emergency, that we’d want to be able to store weapons and supplies in Japan in order to ship END_OF_DOCUMENT_TOKEN_TO_BE_REPLACED

Saturday’s Nikkei and Mainichi wrote that in Georgia earlier in the week senior defense officials of the United States and Japan held consultations on extended deterrence and agreed that the U.S. nuclear umbrella and bilateral missile defense cooperation are indispensable for ensuring East Asian security amid the rapid military buildup by China and North Korea. During the first session of END_OF_DOCUMENT_TOKEN_TO_BE_REPLACED

Leaders of U.S., Japan, South Korea to meet in Spain

Monday’s Nikkei and Sankei took up a South Korean government announcement on Sunday that President Yoon will hold a three-way summit with President Biden and Prime Minister Kishida on the sidelines of the NATO conference in Madrid on Wednesday. It will be the first trilateral summit between the three partners in almost five years. According to the dailies, there will END_OF_DOCUMENT_TOKEN_TO_BE_REPLACED