Most papers wrote that ahead of Prime Minister Abe’s visit to Cuba on Sept. 22, the governments of Japan and Cuba signed a deal on Monday for Japan to gradually write off 119.7 billion yen of Cuba’s debt, which is two-thirds of the nation’s total debt to Japan. Tokyo hopes the debt relief will help promote economic ties with Havana. END_OF_DOCUMENT_TOKEN_TO_BE_REPLACED

Asahi and Mainichi wrote that Prime Minister Abe and his Canadian counterpart Trudeau spoke by phone on Tuesday and agreed on the need for their nations to cooperate in responding to North Korea. Abe told Trudeau that the unprecedented threat level calls for an unprecedented response and it is necessary for the international community to deal with the situation firmly. END_OF_DOCUMENT_TOKEN_TO_BE_REPLACED

Abe to meet with Fidel Castro

Yomiuri reported on the disclosure by a GOJ source that PM Abe is likely to meet with Cuban President Raul Castro and his elder brother former President Fidel Castro when he visits Havana in late September. The prime minister is expected to convey the GOJ’s readiness to cancel two-thirds of the debt that Havana owes Tokyo, or 120 billion yen, END_OF_DOCUMENT_TOKEN_TO_BE_REPLACED 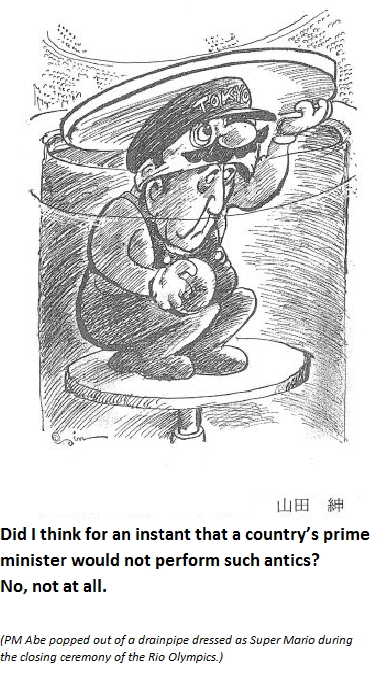 Abe to visit Cuba next month

TV-Asahi claimed that PM Abe is likely to visit Cuba in late September via New York where he plans to attend the UN General Assembly meeting. In the first-ever trip to Havana by a Japanese leader, Abe is expected to hold a summit with President Raul Castro. The premier may also meet with Fidel Castro. Mainichi and Nikkei carried similar END_OF_DOCUMENT_TOKEN_TO_BE_REPLACED

Saturday morning’s Asahi carried on page 3 its one-on-one interview with Cuba’s First Vice President Miguel Diaz-Canel Bermudez conducted on Thursday in Tokyo, during which he expressed concern over presumptive Republican presidential nominee Donald Trump. Diaz-Canal, who is seen as a potential successor to President Castro, reportedly said: “President Obama said the process of normalization of diplomatic relations will not END_OF_DOCUMENT_TOKEN_TO_BE_REPLACED

Yomiuri and Nikkei wrote that Prime Minister Abe held talks with visiting Cuban First Vice President Diaz-Canel on Thursday at the Kantei and agreed to strengthen economic and other relations between Japan and Cuba. Yomiuri wrote that the Cuban official conveyed to Abe a message from President Raul Castro inviting the Japanese leader to visit his nation. Nikkei front-paged its END_OF_DOCUMENT_TOKEN_TO_BE_REPLACED