Monday’s Yomiuri gave front-page play to a report on the results of its opinion poll conducted between Jan. 14 and 16, which found that the public support for the Kishida Cabinet rose 4 points from last month to 66%, marking a record high since the current Cabinet was launched in October 2021. Nonsupport remained unchanged at 22%. The paper wrote END_OF_DOCUMENT_TOKEN_TO_BE_REPLACED

NHK reported on a speech that Prime Minister Kishida plans to deliver on the first day of the regular Diet session on Jan. 17 during which he will present his key policy initiatives for FY2022. The premier is set to explain the administration’s plan to boost healthcare capacity in the face of the rapid spread of the Omicron strain of END_OF_DOCUMENT_TOKEN_TO_BE_REPLACED 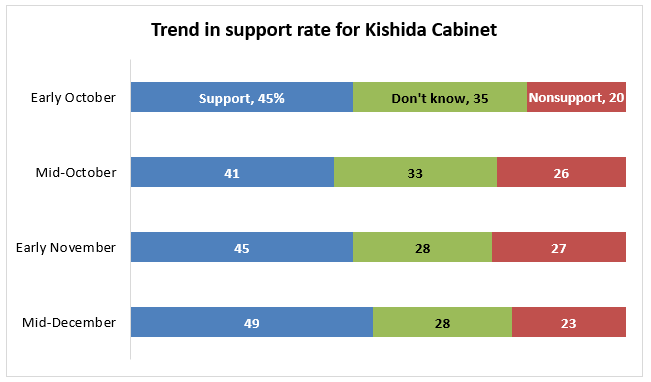 By Kimijima Hiroshi   A unique feature of the polling results on the Kishida Cabinet is the high number of respondents who say they “do not know” when asked whether they support the new cabinet.   In the poll taken in early October last year right after the Kishida Cabinet was launched, 45% of respondents said that they support the END_OF_DOCUMENT_TOKEN_TO_BE_REPLACED

Eight of Prime Minister Kishida Fumio’s close aides and advisors are former vice ministers, directors general, and other Kasumigaseki heavyweights. This lineup is the result of Kishida’s recruitment efforts to avoid making the same mistakes as the two former administrations in which the prime minister’s advisors were criticized as being “too young” (in the words of a senior Kantei official) END_OF_DOCUMENT_TOKEN_TO_BE_REPLACED

Mainichi and Asahi reported that Tuesday marked the three-month point since Prime Minister Kishida took office on Oct. 4, noting that he apparently has no problem changing course even on key policy initiatives. Kishida is not a man of principle,” said an LDP lawmaker who worked with him when he was LDP Research Council chairperson. “He is passive, a good END_OF_DOCUMENT_TOKEN_TO_BE_REPLACED

The Saturday editions of all national dailies reported on Prime Minister Kishida’s New Year’s message in which he vowed to continue to take all necessary measures to fight COVID-19 through enhanced prevention and testing and early treatment, while bracing for the worst-case scenario of the Omicron variant spreading in Japan.   On international affairs, Kishida vowed to move ahead with END_OF_DOCUMENT_TOKEN_TO_BE_REPLACED

All national papers reported that the GOJ plans to appoint former Vice Minister for Land and Infrastructure Mori Masafumi as special advisor to the prime minister in charge of reconstruction and national resilience. 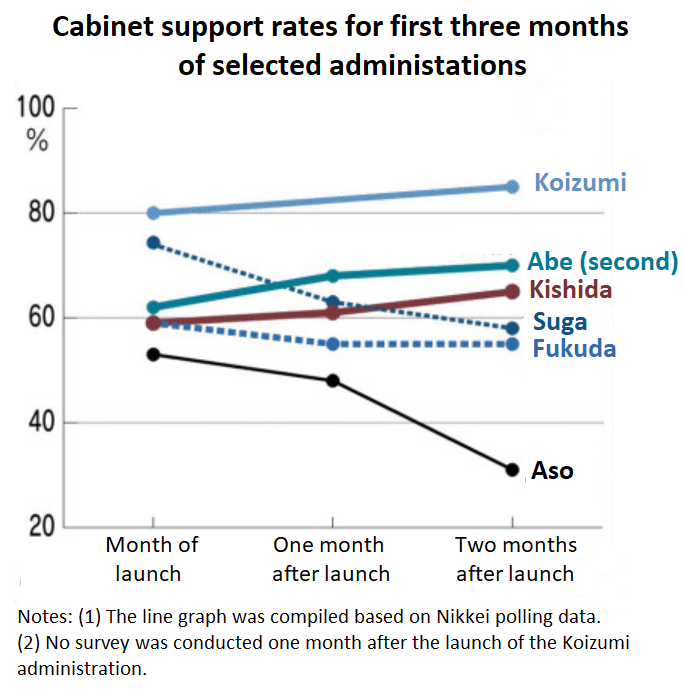 Prime Minister Kishida Fumio will mark the completion of his third month in office on Jan. 4, 2022. In the December Nikkei public opinion poll, the Prime Minister enjoyed a cabinet support rate of 65%, up 6 percentage points from October. Almost 80% of all administrations over the past quarter century have seen their support rate decline over the first END_OF_DOCUMENT_TOKEN_TO_BE_REPLACED

RIEKO MIKI, Nikkei staff writer   TOKYO — Three days after taking office as Japan’s foreign minister, Yoshimasa Hayashi was on the phone with U.S. Secretary of State Antony Blinken. After exchanging peasantries and the usual talking points, the two diplomats quickly broke the ice by moving on to their favorite pastime: rock music.   Blinken has what he jokingly END_OF_DOCUMENT_TOKEN_TO_BE_REPLACED

YAMAGUCHI, Japan – Yamaguchi Deputy Gov. Kazuhiko Komatsu was fined 300,000 yen ($2,600) on Friday for recruiting supporters for Japanese Foreign Minister Yoshimasa Hayashi over the October general election in violation of the election law.   Komatsu paid the fine after prosecutors in the western prefecture issued a summary indictment on Friday, a day after police referred the case to prosecutors. END_OF_DOCUMENT_TOKEN_TO_BE_REPLACED