By Aibara Ryo and Takada Masayuki, Beijing   The second Kishida administration appointed Hayashi Yoshimasa new Foreign Minister. Hayashi must seek a path for achieving stable relations with China in the context of the Japan-U.S. alliance amid increasing tensions between China and the U.S. The diplomatic capability of Hayashi and Prime Minister Kishida Fumio, head and the senior member of END_OF_DOCUMENT_TOKEN_TO_BE_REPLACED

Sunday’s Mainichi published the results of its latest public opinion poll that put support for the Kishida administration at 48%, down 1 point from six weeks ago, and nonsupport at 43%, up 3 points. Support for the Japan Innovation Party doubled to 16%, exceeding support for the Constitutional Democratic Party of Japan (12%) to make it the most popular opposition END_OF_DOCUMENT_TOKEN_TO_BE_REPLACED

TOKYO — Japan’s new Foreign Minister Yoshimasa Hayashi will immediately be shoved into the driver’s seat of a fast-moving car, tasked with avoiding the roadblocks and potholes looming ahead, mostly related to China.   Japan’s Senkaku Islands, which China claims and calls the Diaoyus, lie just 170 km away from Taiwan. That is a five-minute flight for a Chinese jet END_OF_DOCUMENT_TOKEN_TO_BE_REPLACED

CCS Matsuno first in line of succession to PM Kishida

At his first Cabinet meeting held on Nov. 10, Prime Minister Kishida Fumio designated the order of acting prime minister when he is unable to perform his duties as prime minister due to overseas travels or illness. First in line of succession is Chief Cabinet Secretary Matsuno Hirokazu, followed by Minister of State for Measures for Declining Birthrate Noda Seiko; END_OF_DOCUMENT_TOKEN_TO_BE_REPLACED

At a press conference held on Nov. 10, Chief Cabinet Secretary Matsuno Hirokazu announced the appointment of former Minister of Justice Mori Masako and former Minister of Defense Nakatani Gen as special advisors to the prime minister on female empowerment and international human rights issues, respectively. Kihara Seiji and Murai Hideki have been reappointed as special advisors to the prime END_OF_DOCUMENT_TOKEN_TO_BE_REPLACED 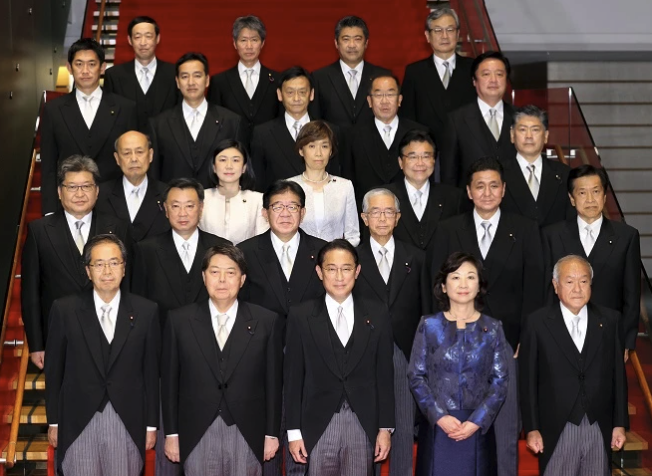 Editorial: Onus is now on Kishida to flesh out his grand vision

Prime Minister Fumio Kishida, armed with a fresh mandate to govern following his party’s solid victory in the Oct. 31 Lower House election, formed his second Cabinet on Nov. 10 to replace the one he created when he took over a little more than a month ago.   Kishida now must show he is worthy of voters’ expectations. In particular, END_OF_DOCUMENT_TOKEN_TO_BE_REPLACED

The second Cabinet of Prime Minister Fumio Kishida was inaugurated on Nov. 10, and it faces a mountain of issues, both internally and externally. How will it steer Japan through these difficult times?   Following the Oct. 31 House of Representatives election, Kishida stated that he had “gained the public’s confidence.” This being the case, he bears a heavy responsibility. END_OF_DOCUMENT_TOKEN_TO_BE_REPLACED

The Thursday editions of all national dailies wrote that Prime Minister Kishida was reelected by both houses of the Diet and launched his second cabinet on Wednesday. Kishida named former Education Minister Hayashi Yoshimasa as foreign minister, former Defense Minister Nakatani Gen as special advisor on human rights, and former Justice Minister Mori Masako as special advisor on women’s empowerment.