By Watanabe Tsuneo, senior research fellow, Sasakawa Peace Foundation   With Russia’s invasion of Ukraine and China’s military buildup in mind, holding concrete discussions on foreign and national security is indispensable for the ruling and opposition parties.   The United States no longer possess overwhelming power on either the economic or military fronts. With East Asia facing a more dire END_OF_DOCUMENT_TOKEN_TO_BE_REPLACED

By Imamura Takashi, director of Marubeni Research Institute   Continuity is an important element in foreign policy. If Japan is not consistent in foreign policy, it will not be able to win the international community’s trust.   China has become a strategic competitor. As the direction of globalization has changed, [there are countries that] only think about their own gain, END_OF_DOCUMENT_TOKEN_TO_BE_REPLACED

By Yora Masao, senior writer   What should be Japan’s defense posture during Russia’s continued invasion of Ukraine? It is natural for political parties to compete in presenting their visions for defense in the ongoing Upper House election campaign.   But is it true that national defense has really become a major election campaign issue? I doubt it. The vision END_OF_DOCUMENT_TOKEN_TO_BE_REPLACED

According to a survey by the Inter-Parliamentary Union (IPU), a place for exchanges among lawmakers from across the world, Japan ranks 162nd in the percentage of female lawmakers. It ranks lowest among the Group of Seven (G7) major economies. The Liberal Democratic Party (LDP) has been making efforts to rectify this shameful situation ahead of the Upper House election, but END_OF_DOCUMENT_TOKEN_TO_BE_REPLACED 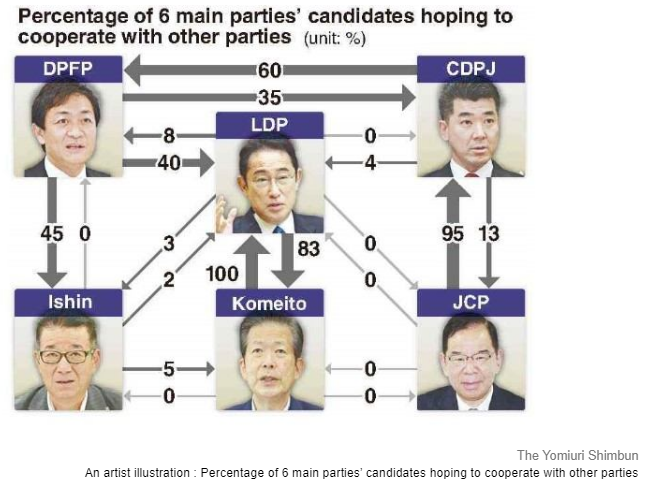 The results of a Yomiuri Shimbun survey of candidates running in the upcoming House of Councillors election suggest that those running for the Liberal Democrinsatic Party and its coalition partner Komeito have a strong mutual hope to cooperate with each other after the election, while many candidates from opposition parties have unrequited hopes for postelection allies.   When asked which END_OF_DOCUMENT_TOKEN_TO_BE_REPLACED

Tokyo, June 30 (Jiji Press)–Japanese political parties have pledged big spending to voters ahead of the July 10 House of Councillors election, while they are short on how to finance such measures.     The Liberal Democratic Party-led ruling bloc has promised to take measures to address soaring prices and revive the economy hurt by the novel coronavirus pandemic, putting spending before END_OF_DOCUMENT_TOKEN_TO_BE_REPLACED

FOCUS: CDP, DPFP battle to save face in Kagawa

Tokyo, June 30 (Jiji Press)–Two major opposition parties–the Constitutional Democratic Party of Japan and the Democratic Party for the People–are engaged in a fierce battle in the Kagawa prefectural constituency in the July 10 House of Councillors election, while a ruling party incumbent is seeking re-election.   This battle has turned into one where both parties’ reputation is on the END_OF_DOCUMENT_TOKEN_TO_BE_REPLACED

By Terasawa Tomomi   Matsui Ichiro, Osaka mayor and representative of Nippon Ishin no Kai (Japan Innovation Party, Ishin), has both announced that he will retire from politics next spring and changed his campaign strategy during the Kishida administration from that he used during the Abe and Suga administrations.   Ishin regained momentum in the 2021 Lower House election, but END_OF_DOCUMENT_TOKEN_TO_BE_REPLACED

By Sawada Daisuke   When the Upper House election officially kicked off on June 22, former Prime Minister Abe Shinzo was in Tokyo’s Yurakucho district. Giving a campaign speech for a Liberal Democratic Party candidate, he stressed the need for compiling a second supplementary budget for the current fiscal year after the election.   A junior lawmaker close to Abe END_OF_DOCUMENT_TOKEN_TO_BE_REPLACED

FOCUS: Rising prices key focus in election but no party has silver bullet

TOKYO — As prices of necessity goods such as food and electricity soar following Russia’s invasion of Ukraine, political parties in Japan are struggling to present immediate solutions as they head into the July 10 election for the upper chamber of parliament.   Since Japan is a resource-importing country, surging energy prices and rapid falls of the yen against the END_OF_DOCUMENT_TOKEN_TO_BE_REPLACED