The outcome of the upcoming House of Councillors election will decide the fate of the opposition party leaders and the opposition’s political line.

All papers wrote that the Japanese Communist Party’s policy commission chairman Fujino resigned from the post on June 28 for calling Japan’s defense spending a “budget to kill people.” Fujino told a news conference on Tuesday that the expression he used during an NHK TV show on Sunday was not in line with the party policy and that he deeply END_OF_DOCUMENT_TOKEN_TO_BE_REPLACED

Democratic Party (DP) leader Katsuya Okada (elected from the House of Representatives third district of Mie) has created a stir for stating on June 26 that he will not run for reelection as party leader if the DP candidate loses in the House of Councillors Mie electoral district. Party members are critical of his “incoherence and elusiveness” in leaving his END_OF_DOCUMENT_TOKEN_TO_BE_REPLACED 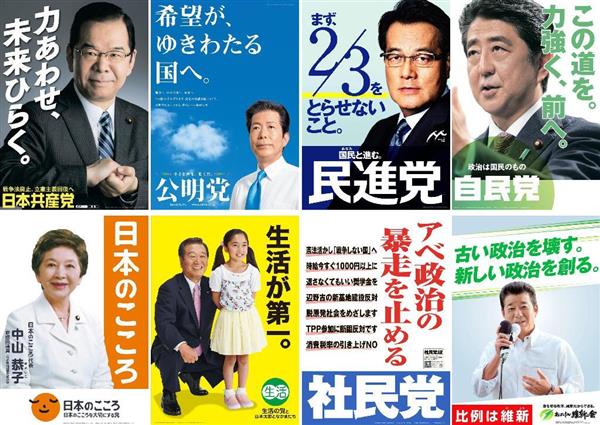 With the House of Councillors election approaching on July 10, posters of the ruling and opposition parties can be seen everywhere. The typical poster has the photo of the party leader plus a catchphrase that is easy to remember. One poster is text only. Some parties prepared several types of posters depending on where the posters are being used.   END_OF_DOCUMENT_TOKEN_TO_BE_REPLACED

Okada to quit if DP candidate defeated in his home constituency

All Monday papers focused on a stump speech delivered on Sunday by DP President Okada in his home constituency of Mie, during which he said he will not seek reelection in the September presidential election in the event that the DP candidate in his home district loses to the LDP competitor.

All Monday papers took up remarks made on a Sunday talk show by Japanese Communist Party policy chief Fujino, in which he mentioned the FY2016 defense budget that topped five trillion yen for the first time ever and said: “We should prioritize funding for supporting and nurturing people, instead of spending for killing people.” The politician later clarified and retracted END_OF_DOCUMENT_TOKEN_TO_BE_REPLACED

Yomiuri Shimbun’s survey in the initial stage of the House of Councillors election campaign shows that the ruling Liberal Democratic Party (LDP) and Komeito are likely to win a majority of the seats being contested (61).

Komeito and the Japanese Communist Party (JCP) are clashing fiercely in multi-seat constituencies electing three or more House of Councillors members. Since these two parties are likely to win about the same number of seats in the proportional representation segment, results in the multi-seat districts will determine which party will be the No. 3 party after the Liberal Democratic Party END_OF_DOCUMENT_TOKEN_TO_BE_REPLACED

An analysis of the findings from Yomiuri Shimbun’s survey of the initial phase of the House of Councillors election campaign shows that like in the 2013 election, the Liberal Democratic Party (LDP) proportional representation ticket is likely to win the most number of votes. The Japanese Communist Party (JCP) will probably increase its number of seats, while the Initiatives from END_OF_DOCUMENT_TOKEN_TO_BE_REPLACED

Although the survey conducted by Yomiuri Shimbun on the initial phase of the House of Councillors election campaign showed that the ruling parties are on track to win a majority of the seats being contested (61), whether they will be able to secure a two-thirds majority that will enable the submission of motions for constitutional amendment will depend on the END_OF_DOCUMENT_TOKEN_TO_BE_REPLACED