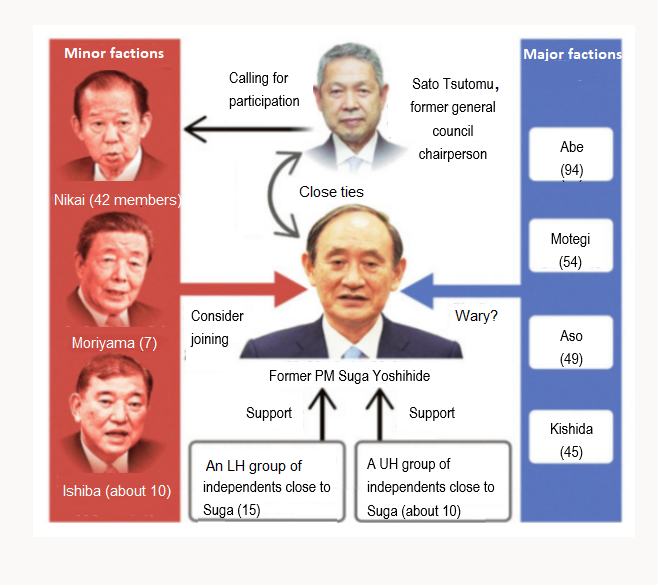 By Hiroike Yoshikazu   Moves are spreading within the Liberal Democratic Party for the party’s minority factions to rally together under a policy study group being organized by former Prime Minister Suga Yoshihide. Lawmakers close to Suga and senior members of the Nikai faction (42 members), which is led by former Secretary-General Nikai Toshihiro, recently agreed to cooperate on the END_OF_DOCUMENT_TOKEN_TO_BE_REPLACED

Opposition parties draw up economic stimulus measures one after another

The opposition parties have been drawing up a barrage of proposals for economic stimulus measures aimed at addressing the pandemic and soaring prices caused by Russia’s invasion of Ukraine. They are also calling on the government to formulate a supplementary budget for fiscal 2022 in a bid to win over voters ahead of the summer Upper House election.   At END_OF_DOCUMENT_TOKEN_TO_BE_REPLACED

TOKYO — The average value of assets held by Japanese lower house members came to 29.24 million yen ($234,000), slightly up from a record low 28.92 million yen in the previous survey, according to a Kyodo News tally based on data released Monday.   The average monetary value of financial assets, land and property held by 465 House of Representatives members END_OF_DOCUMENT_TOKEN_TO_BE_REPLACED

By Kawada Atsushi   Russia’s invasion of Ukraine is pushing the government and the Liberal Democratic Party (LDP) into the direction of a drastic increase in defense spending. With an eye on the possession of the capability to strike enemy bases, the party’s Research Commission on Security has indicated that it will sort out points of contention in a draft END_OF_DOCUMENT_TOKEN_TO_BE_REPLACED

LDP to propose turning defense program into a ten-year program

The Liberal Democratic Party (LDP) will call for revamping frameworks of three defense documents in a package of recommendations that it will put together by the end of April in a bid to bolster the nation’s defense capability. The recommendations include a proposal for changing the name of the “Medium Term Defense Program (MTDP),” a five-year plan that estimates defense END_OF_DOCUMENT_TOKEN_TO_BE_REPLACED

Former Minister of State for Measures for Declining Birthrate Eto Seiichi of the Liberal Democratic Party met with former LDP Secretary-General Nikai Toshihiro at the party headquarters on April 8 and conveyed his intent to leave the Nikai faction (Shisuikai). Later he submitted his letter of withdrawal and the faction accepted it. Sources close to the faction disclosed this on END_OF_DOCUMENT_TOKEN_TO_BE_REPLACED

Tokyo, April 9 (Jiji Press)–Weighing its cooperation with the United States and European countries, the administration of Japanese Prime Minister Fumio Kishida has made tough decisions to stop coal imports from Russia and expel Russian diplomats as fresh sanctions on Moscow following the revelation of a series of atrocious acts by Russian troops against Ukrainians.     But as these measures END_OF_DOCUMENT_TOKEN_TO_BE_REPLACED

Tokyo, April 10 (Jiji Press)–A fierce battle is seen for Tokyo in this summer’s House of Councillors election, with major parties finishing the selection of their candidates in the Japanese capital in the closely watched poll for the upper chamber of the Diet, Japan’s parliament.     Six of the 12 seats allotted to the Tokyo constituency will be contested in END_OF_DOCUMENT_TOKEN_TO_BE_REPLACED

At a directors’ meeting of the Lower House Committee on Rules and Administration held on April 7, the ruling and opposition camps agreed that deliberations on proposed revisions to the Temporary Tariff Measures Act and the Foreign Exchange and Foreign Trade Act aimed at strengthening economic sanctions against Russia will start start at a Lower House plenary session on April END_OF_DOCUMENT_TOKEN_TO_BE_REPLACED

Kanazawa, Ishikawa Pref., April 7 (Jiji Press)–The official campaign period began Thursday for a House of Councillors seat by-election in the prefectural constituency of Ishikawa, central Japan, closely watched as a prelude to this summer’s election for the upper chamber of the Diet, the country’s parliament.     The April 24 by-election could be an opportunity for voters to evaluate the administration of Prime END_OF_DOCUMENT_TOKEN_TO_BE_REPLACED