NHK reported at noon that Japanese nationals are still trapped in Juba, South Sudan, due to the ongoing violence, while Fuji TV reported at noon on a gun battle that occurred near the GSDF camp in Juba, South Sudan, around July 10 and 11, in which 8 died and about 60 were injured. Fuji TV said that according to a END_OF_DOCUMENT_TOKEN_TO_BE_REPLACED

Security laws to be unshackled after election

Due to the House of Councillors election, the government has withheld discussions on new missions arising from the security laws enacted at the end of March. Now that the election is over, the administration intends to restart the Self-Defense Forces’s (SDF) training for new missions in full scale. The government will specifically deliberate on whether or not the administration will END_OF_DOCUMENT_TOKEN_TO_BE_REPLACED

NHK reported at noon on the fighting that was reignited in South Sudan, where SDF troops are participating in a PKO mission. The network said that due to the ongoing gun battle in the capital city of Juba, at least 45 Japanese citizens are unable to leave their homes or hotels. The network said that according to MOFA, about 70 END_OF_DOCUMENT_TOKEN_TO_BE_REPLACED 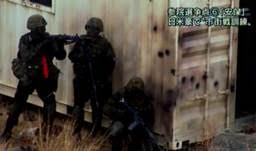 TV-Asahi’s “Hodo Station” reported that following the enactment of the comprehensive security laws last September that expand the scope of Japan’s military operations overseas, more SDFtraining drills are designed to enable personnel to engage in real combat. It highlighted a trilateral exercise among the U.S., Australia, and Japan held in Australia in May, in which SDF soldiers took part in END_OF_DOCUMENT_TOKEN_TO_BE_REPLACED

The Maritime Self-Defense Force (MSDF) is implementing on July 1 a reorganization plan that will involve incorporating the First Transport Corps with transport capability for landing operations into the Mine Warfare Force for minesweeping operations in an effort to strengthen the capability to recapture occupied remote islands. This is based on a scenario that calls for the Mine Warfare Force END_OF_DOCUMENT_TOKEN_TO_BE_REPLACED

Retired Lt. Gen. Kunio Orita, former commander of the Air Support Command (ASC) of the Air Self-Defense Force (ASDF), posted on June 28 on an Internet news site an article disclosing that Chinese fighters “assumed an attack posture against SDF interceptors over the East China Sea, with the result that SDF fighters left the theater as they evaded a [possible] END_OF_DOCUMENT_TOKEN_TO_BE_REPLACED

The Ground Self-Defense Force (GSDF) introduced a specialized unit called the International Peace Cooperation activities Training Unit (IPCATng) to the press on Wednesday. The IPCATng is stationed at Camp Komakado in Gotenba City, Shizuoka Prefecture, and responsible for training GSDF units assigned for overseas operations such as the Peacekeeping Operation (PKO). Enactment of the security law last spring made overseas END_OF_DOCUMENT_TOKEN_TO_BE_REPLACED

A Chinese warship entered contiguous waters off the Senkaku Islands at 12:50 a.m. on June 9. At around 2:00 a.m., the Chinese Ambassador to Japan was summoned to the Foreign Ministry, where Japan lodged a strong protest, and a National Security Council meeting was also held subsequently.

Following the release of the findings of investigations [into an accident in which GSDF members shot live rounds by mistake in an exercise], Kiyofumi Iwata, chief of staff of the Ground Self-Defense Force, said at a press conference on June 20 that “We will change SDF personnel’s awareness of how to manage and use weapons and ammunition.”   According to END_OF_DOCUMENT_TOKEN_TO_BE_REPLACED

Nikkei wrote that Mayor Shimoji of the city of Miyakojima, Okinawa Prefecture, expressed his intention during a city assembly session on June 20 to accept a GOJ plan to deploy a GSDF unit on the island to enhance the defense of the Nansei Islands. The mayor reportedly said the threats posed by China and North Korea are increasing and he END_OF_DOCUMENT_TOKEN_TO_BE_REPLACED