New commander takes up post at Yokosuka Naval Base

By Yamamoto Nobuyuki   A change-of-command ceremony was held  at U.S. Yokosuka Naval Base (Yokosuka City) on July 8. Captain Les Sobol replaced Captain Rich Jarrett as the base’s commander. Captain Jarrett, who had been dealing with the COVID-19 pandemic for nearly two years, thanked his colleagues, the Maritime Self-Defense Force, and local governments for “making his mission the best.” END_OF_DOCUMENT_TOKEN_TO_BE_REPLACED

Bullet found on premises of private residence in Okinawa

Asahi reported that what appeared to be a bullet was discovered in the backyard of a private residence in the town of Kin in Okinawa on Thursday morning, saying that the owner of the house found that one of its windows had been broken late Wednesday night. Because the residence is adjacent to Camp Hansen, the police suspect the object END_OF_DOCUMENT_TOKEN_TO_BE_REPLACED

YOKOSUKA, Kanagawa — The government of this east Japan city announced on July 1 that drainage water contaminated with chemical compounds suspected to cause cancer, such as perfluorooctanesulfonic acid (PFOS), was likely discharged into the Port of Yokosuka from a U.S. naval base in the city.   The announcement came after the Japanese Defense Ministry’s South Kanto Defense Bureau alerted END_OF_DOCUMENT_TOKEN_TO_BE_REPLACED

Sunday’s Mainichi wrote that the Okinawa Police arrested on Saturday a U.S. Marine assigned to MCAS Futenma on suspicion of assaulting a local man by strangling him from behind on a street in Okinawa City at around 4: 55 a.m. on Saturday. The police suspect the Marine was intoxicated. The suspect has denied the allegation. 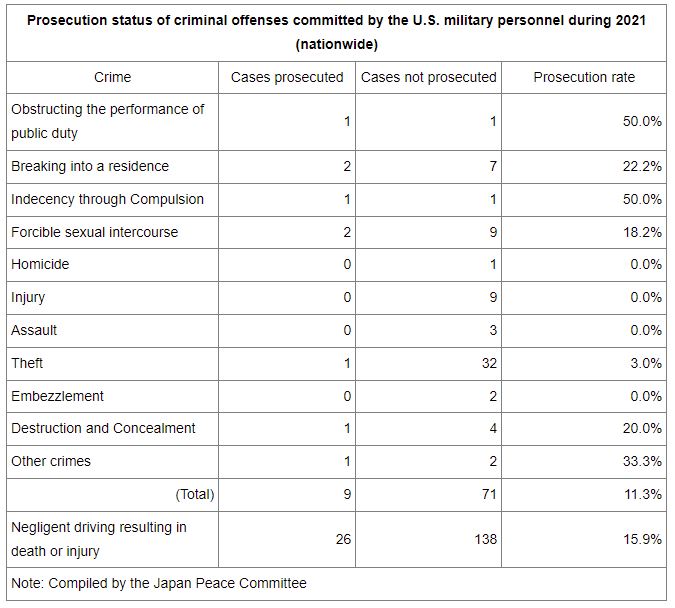 90% of crimes committed by U.S. forces personnel not prosecuted

The prosecution rate for general criminal offenses (excluding negligent driving resulting in death and injury) committed by U.S. military personnel (U.S. service members, civilian base workers, and family members) stationed in Japan during 2021 was approximately 11.3% and about 90% of these cases were not prosecuted, Akahata learned from a document obtained by the Japan Peace Committee.   Compared with END_OF_DOCUMENT_TOKEN_TO_BE_REPLACED

On June 27, the Naha District Court (presiding judge: Kato Takashi) sentenced a 32-year-old U.S. servicemember affiliated with Torri Station to eight months in prison for violating the Road Traffic Act but suspended the sentence for three years (the prosecution had demanded eight months’ imprisonment). The defendant was arrested in June last year for driving under the influence of alcohol END_OF_DOCUMENT_TOKEN_TO_BE_REPLACED

By Tsukazaki Shohei and Asato Shugo   On June 24, the Okinawa prefectural government responded that it would agree to a proposal that was presented by a tribunal of the Environmental Dispute Coordination Commission within the Ministry of Internal Affairs and Communications concerning the digging of soil at a mine located inside the Okinawa Senseki Quasi-National Park in commemoration of END_OF_DOCUMENT_TOKEN_TO_BE_REPLACED

Okinawa Times wrote that Governor Tamaki held brief talks with Prime Minister Kishida ahead of Thursday’s ceremony in Okinawa marking the end of the Battle of Okinawa. According to Tamaki, the premier did not make a clear response to the governor’s request to the central government to set up a venue for dialogue on Futenma relocation or obtain the U.S. END_OF_DOCUMENT_TOKEN_TO_BE_REPLACED

NHK’s Aomori station reported on Thursday that following the leakage of 760 liters of water from pipes at a hangar at Misawa AB in January, the GOJ and the governments of Aomori Prefecture and Misawa City conducted water quality surveys at ten locations near the base on June 17. The Misawa City Government announced on Thursday that chemical compounds 2.4 END_OF_DOCUMENT_TOKEN_TO_BE_REPLACED