Tokyo, Oct. 3 (Jiji Press)–Hiroshi Kojima, senior official at Japan’s National Police Agency, will become superintendent general at Tokyo’s Metropolitan Police Department on Thursday, the government said Monday.     Kojima, 57, will replace Yoshihiko Oishi, 59. Kojima oversaw security at a series of events related to the enthronement of Emperor Naruhito in 2019 when he was chief of the MPD’s Security Bureau.     END_OF_DOCUMENT_TOKEN_TO_BE_REPLACED 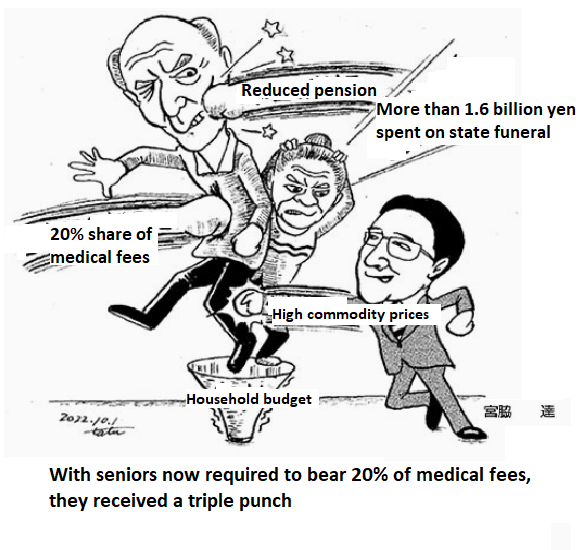 By William Fee, staff writer   The Tokyo District Court ruled on Friday that denying an American man in a same-sex marriage with a Japanese national a “designated activities” residency status — already granted to foreign same-sex married couples — was against the constitutional guarantee of equality under the law.   In what was both a loss and a win END_OF_DOCUMENT_TOKEN_TO_BE_REPLACED

By Tomoko Otake, staff writers   The health ministry on Friday issued the nation’s first guidelines on “confidential births,” requiring that hospitals keep records on women giving birth anonymously and that they set out the steps they will take if a child requests their mother’s identity years later.   The guidelines, intended for hospitals and municipal governments, were compiled after END_OF_DOCUMENT_TOKEN_TO_BE_REPLACED

By Sho Komine / Yomiuri Shimbun Staff Writer   Ukrainians having financial difficulties have been identified as organ donors in several cases of suspected trafficking of living kidney transplants carried out overseas through the mediation of a Tokyo-based non-profit organization. Even when there is an agreement between donors and recipients or a third party, such transplants are criticized internationally as END_OF_DOCUMENT_TOKEN_TO_BE_REPLACED

Tokyo, Sept. 30 (Jiji Press)–The Japanese government has submitted a provisional recommendation form to UNESCO for the designation of the Sado gold mine site in Niigata Prefecture, central Japan, as a World Cultural Heritage site.     If no problem is found, the government will resubmit it as a formal recommendation.     “We will bolster our cooperation with Niigata Prefecture, the city of Sado and END_OF_DOCUMENT_TOKEN_TO_BE_REPLACED

All national dailies reported on Saturday that the Tokyo District Court ruled on Friday that it is “unconstitutional” for the government to deny residency status to a non-Japanese spouse in a same-sex marriage. The papers said the ruling came in a damages suit filed by an American man who was denied long-term residency to live in Japan with his Japanese END_OF_DOCUMENT_TOKEN_TO_BE_REPLACED

By YUJI MASUYAMA/ Staff Writer   Police have arrested six Japanese and Chinese nationals in connection with the alleged sale of counterfeit residence cards through foreign brokers.   A joint investigation team, comprising members of the Tokyo Metropolitan Police Department and five prefectural police departments, announced on Sept. 29 it busted six people, aged 29 to 34, on suspicion of END_OF_DOCUMENT_TOKEN_TO_BE_REPLACED

BY WILL FEE STAFF WRITER   On Friday, judges at the Tokyo District Court will announce a decision on whether or not to grant long-term residency to U.S. citizen Andrew High, who has lived in Japan with his Japanese husband Kohei for over 10 years.   Legally married in the U.S. in 2015, the couple have been together since 2004. But END_OF_DOCUMENT_TOKEN_TO_BE_REPLACED

Tokyo, Sept. 29 (Jiji Press)–Japan’s health ministry Thursday proposed criminalizing cannabis use as the country’s existing marijuana control law has no provision that punishes users.   The ministry also proposed lifting the ban on cannabis use for medical purposes.   The law currently bans possession, cultivation of cannabis plants and the use of medical products made from cannabis.   When END_OF_DOCUMENT_TOKEN_TO_BE_REPLACED