About 80% of Vietnamese, Cambodian trainees in Japan owe debt

EUGENE LANG, Nikkei staff writer   TOKYO — More than half the foreign technical trainees in a recent survey took on an average of 540,000 yen ($3,950) in debt to come to Japan, with around 80% of trainees from Vietnam and Cambodia carrying such debts. The survey of around 2,100 technical trainees was conducted by Japan’s Immigration Services Agency. It took place END_OF_DOCUMENT_TOKEN_TO_BE_REPLACED

Tokyo, July 28 (Jiji Press)–A textile industry group in Japan said Thursday it has created guidelines encouraging companies to pay more attention to human rights abuses in supply chains.     The Japan Textile Federation’s guidelines include a checklist for company executives to see what they need to pay attention to for each type of rights abuses, such as forced labor, END_OF_DOCUMENT_TOKEN_TO_BE_REPLACED

NAGOYA — A lawyer for a suspect in police custody in Nagoya has asked for the man’s temporary release, claiming his continued detention and denial of treatment after being infected with the coronavirus constitutes a “human rights violation.”   The request filed Tuesday with the Nagoya District Court concerns a 47-year-old man who was arrested earlier this month over a gambling-related case. After END_OF_DOCUMENT_TOKEN_TO_BE_REPLACED

Mainichi ran a Kyodo report saying that following the execution on Tuesday of a man convicted of killing seven people in an attack in Tokyo in 2008, the EU Delegation, the heads of mission of EU member states, Iceland, Norway, and Switzerland issued a joint statement calling on Japan to adopt a moratorium on executions. The statement said: “The death END_OF_DOCUMENT_TOKEN_TO_BE_REPLACED

SENDAI — Harassment and other abuses of foreign trainees in Japan are mounting, arousing criticism that the supervisory agency in charge of the government-sponsored technical internship program has failed in its role to oversee the program.   According to support groups, investigations into companies that accept foreign trainees have been insufficient at best, while, years after the program’s inception, there is END_OF_DOCUMENT_TOKEN_TO_BE_REPLACED

SENDAI — Harassment and other abuses of foreign trainees in Japan are mounting, arousing criticism that the supervisory agency in charge of the government-sponsored technical internship program has failed in its role to oversee the program. According to support groups, investigations into companies that accept foreign trainees have been insufficient at best, while, years after the program’s inception, there is END_OF_DOCUMENT_TOKEN_TO_BE_REPLACED

U.S., Japan to discuss import of goods produced in Xinjiang at “2+2”

Sankei reported that it learned on Monday that during the inaugural meeting of the U.S.-Japan “2+2” meeting of foreign and economic ministers to be held in Washington later this month, the two nations are planning to discuss ways to strengthen import controls on goods that are regarded as problematic in terms of human rights in light of China’s oppression of END_OF_DOCUMENT_TOKEN_TO_BE_REPLACED

Japan, U.S. to align on human rights, infrastructure at 2-plus-2

Nagoya, July 20 (Jiji Press)–The Japanese government Wednesday rejected plaintiffs’ claims in a damages lawsuit over the death of Sri Lankan detainee Wishma Sandamali.   “Decisions on what medical care should be given are left to the reasonable discretion of detention facility heads, and therefore there was no violation of obligations to exercise due care,” the government said at the END_OF_DOCUMENT_TOKEN_TO_BE_REPLACED 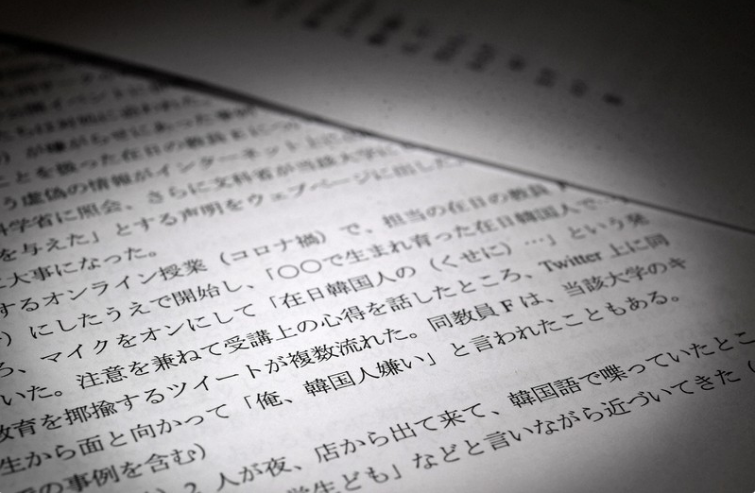 KYOTO — Academics in Kyoto are calling for countermeasures against “racial harassment” at universities following a survey highlighting the lack of specific rules at surveyed institutions, with one expert describing the issue as one “bringing each university’s stance on human rights and diversity into question.”   A 28-year-old “Zainichi” Korean resident of Japan living in Kyoto was shocked by the END_OF_DOCUMENT_TOKEN_TO_BE_REPLACED