Young Japanese leaving stable jobs to give back to society

Instead of seeking stability in life, there are growing moves among the young generation in Japan to give back to society through social enterprises, even at the expense of leaving their stable, and often lucrative, jobs. According to TV-Tokyo’s economic documentary program “Gaia no Yoake” (3/23), a private survey found that among workers in their 20s and 30s, 46% said END_OF_DOCUMENT_TOKEN_TO_BE_REPLACED

Vinyl and cassettes making a comeback among “digital natives”

In the 2015 movie bearing his own name, Steve Jobs told his daughter her Sony Walkman was tacky and promised her he would create a music player that would put “somewhere between 500 and 1,000 songs” in her pocket. The movie perhaps portrayed this as the moment the IT mogul came up with the idea for iTunes and the iPod END_OF_DOCUMENT_TOKEN_TO_BE_REPLACED 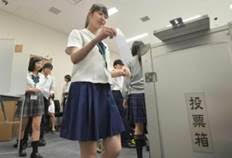 Will enfranchised teens spell the end of Japan’s “silver democracy”?

Last year Japan lowered the voting age from 20 to 18. This change will allow some 2.4 million teens to cast their ballots for the first time in the House of Councillors election this summer. Much discussed here is whether this first amendment of the electoral law in 70 years will mean the end of the “silver democracy” in which END_OF_DOCUMENT_TOKEN_TO_BE_REPLACED

Ask Japanese college students about their career aspirations and you may be surprised to hear many of them say they would like to work for the government. The most popular “dream job” among young Japanese is civil servant, surpassing jobs at such corporate giants as Toyota, Mitsubishi-UFJ Bank, and Mitsui & Co., according to the results of a survey of END_OF_DOCUMENT_TOKEN_TO_BE_REPLACED

Less is more for young Japanese

Have you tried “kondo-ing” your closet yet? Marie Kondo, a Japanese organizing consultant who published the best-selling book, “The Life–Changing Magic of Tidying Up: The Japanese Art of Decluttering and Organizing,” suggests that people should only keep objects and clothes that “spark joy” and throw away everything else in order to enjoy a less stressful and more peaceful life. As END_OF_DOCUMENT_TOKEN_TO_BE_REPLACED

Since the launch of this publication nearly two years ago, we’ve reported on a number of trends among young Japanese, including their tendency to be “inward-looking,” “play it safe,” have “little upward mobility,” and prefer “frugal lifestyles.” However, Naoko Kuga of Nippon Life Insurance Research Institute argues in her recent book entitled “Do young people really not have any money?” END_OF_DOCUMENT_TOKEN_TO_BE_REPLACED

Some 10,000 people gathered in front of the Prime Minister’s Office on June 30 to express opposition to the decision by the cabinet of Prime Minister Shinzo Abe to change Japan’s decades-old interpretation of the Constitution that has prohibited the nation from exercising its right to collective self-defense. Although there were young people at the rally, they were not a END_OF_DOCUMENT_TOKEN_TO_BE_REPLACED

Noritoshi Furuichi, a 29-year-old sociologist, argues in his 2011 book titled “The Happy Youth of a Desperate Country” that Japanese youth are happy despite looming problems with their society, including economic disparities. Furuichi, a Ph.D. student at the Graduate School of Arts and Sciences of the University of Tokyo and a visiting scholar at Keio University’s SFC research center, said END_OF_DOCUMENT_TOKEN_TO_BE_REPLACED

For 12-year-old poet, haiku is hope for life